Breaking down Rondo's rebounds: Beneficial to the team or stat padding? 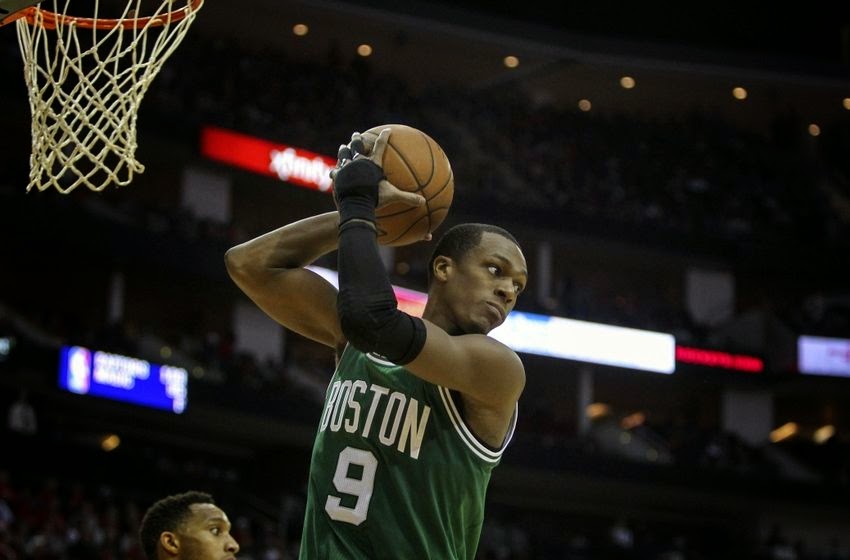 If nothing else, in his first full season back from ACL surgery Rajon Rondo has been filling up the stat sheet. There's been a noticeable change in Rondo this season compared to his half season back. He's quicker, stronger, and more decisive. And with that, a return to his often ridiculous box scores, including his league-leading assist numbers, even despite that he is no longer surrounded by Hall of Fame talent.

Even for the strongest Rondo-doubters, this probably hasn't come as a surprise. Rondo's court-vision, strength and dexterity have always made him an elite assist man and shot-creator. What has been a surprise, is the ridiculous rebounding numbers Rondo has put up through nine games. As of this moment, Rajon Rondo is 22nd in the league when it comes to rebounding. His 8.4 rebounds a game puts him just below a resurgent Chris Bosh, and just above other strong rebounders like Marc Gasol and Paul Millsap.

On the surface, that's really impressive. But rebounding can be a misleading statistic. It's not always representative of how much a player really did to help his team secure a miss. Sometimes boxing a player out of rebounding position is a much more important part of the process than securing the ball. Additionally, not all rebounds are created equal. Clearly, there's a significant difference between a player catching a long-rebound that would've gone out of bounds anyways, and a tip-in in the closing minutes of a Finals game.

So I wanted to take a deeper-dive into Rajon Rondo's early rebounding to get a better idea of how much it benefits the team.

In looking through all the rebounds he's secured this season, one thing is clear; Rajon Rondo is making a conscious effort to be under the rim (or close to it) on shot attempts. On virtually every shot attempt, Rondo leaves his man to enter the paint to be able to potentially grab a rebound. That's slightly unusual for point guards, and even a little different from how I remember Rondo being in the past. Most point guards have a tendency to leak out toward the sideline, and rely on their bigs to secure a rebound and find them on an outlet pass in an effort to get a fast break going.

To this point, Rondo hasn't been doing that. There's a few logical explanations. Er, this is Rajon Rondo we're talking about; there is only one possible answer to this! It's black! Or it's white! Get out of my face, gray.

Without a ton of size in the front court, and few above average rebounders, Rondo and/or Brad Stevens think it's important for the guard to find his way under the hoop (in a heroic effort) to improve the team's chances of securing a rebound

Rondo is so blindingly fast, that it's quicker for him to grab a rebound and start dribbling than wait for an outlet pass

In looking at every rebound, there's definitely a few key takeaways. For starters, there is no doubt, that Rondo's rebounding numbers are a bit inflated, and he does have a tendency to be a bit of a rebound thief. I'd estimate that roughly twice a game, Rondo jumps up to retrieve a rebound that someone else on his team could've easily gotten themselves. Now, before you get too angry, I think this is for good reason. Let's take a look at a sequence against the Mavericks

Below, after a Chandler Parsons drive, you can see the Celtics in a very strong position to secure the rebound; Jeff Green has excellent position on Parsons, and both Kelly Olynyk and Rondo are in position to rebound. 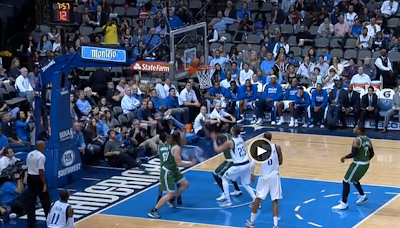 Sorry about the play button. Wasn't able to figure out a way to have it not on my screen

And once the ball begins to fall it's only more evident. The three Celtics players jump for the ball, while the only Maverick near (Parsons) ops against it. Even though he's only competing with his own teammates, Rondo aggressively snags the ball before Green and Olynyk can 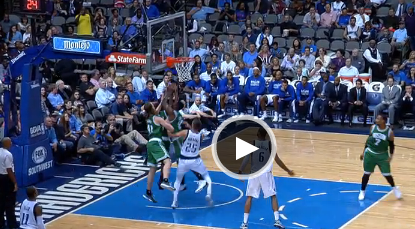 So, rebound thief, right? In some ways yes, in some ways no. Im my opinion, if Rondo's going to be under the rim on misses, it makes sense for him to try and grab the board. Rondo securing the ball means that he can simply turn, and start the offense. It's much quicker, than say, having Olynyk grab the ball, coming down, and then underhand tossing the ball to a waiting Rondo. It might just be a second difference, but an important second if you're looking to attack the other end.

After spinning and dribbling, Rondo's able to immediately create an offensive advantage - as he's able to beat three Mavericks down the court. An advantage he probably wouldn't have been able to create if he didn't grab the board himself. 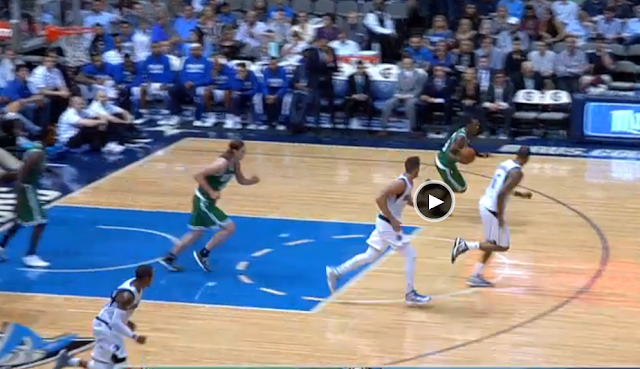 Yes, Rondo's numbers rebound numbers are probably a little inflated, but again, if he's going to be under the hoop anyways, it makes a lot of sense for him to be aggressive.

Now, should he be under there in the first place? There's certainly some pro's and cons to it. Let's start with the good.

Through some combination of shots bouncing a little long and Celtic bigs not being in the right position, Rondo's able to grab a lot of his mid-long range rebounds. It makes sense, with space Rondo is able to use his quickness, and athleticism to grab loose rebounds without having to get too physical. Just like anything, each rebounds value varies, but I will say a lot of them are 50/50 balls that could easily have been grabbed by a Celtic opponent.

Let's take a look at one of the stronger rebounds. After a pick and roll, Kelly Olynyk is forced out away from the rim in order to contest a shot by Eric Bledsoe. Bledsoe was originally Bradley's man, so he's forced to switch onto the much larger Miles Plumlee. When the shot goes up, Rondo leaves his man (Goran Dragic) to be able to help out on a rebound 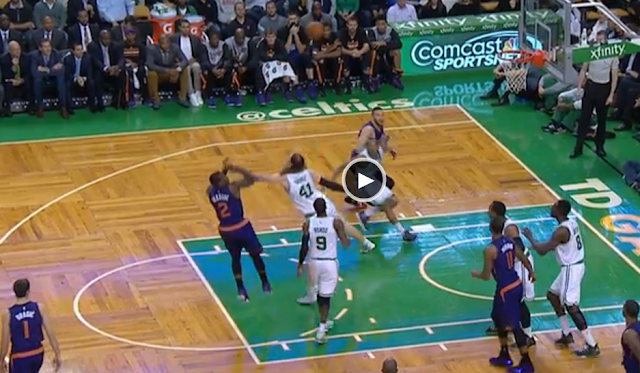 Since Plumlee is much larger than Bradley, he's able to quickly knock Avery out of position and put himself in a good spot to grab what should be an easy rebound and then layup. 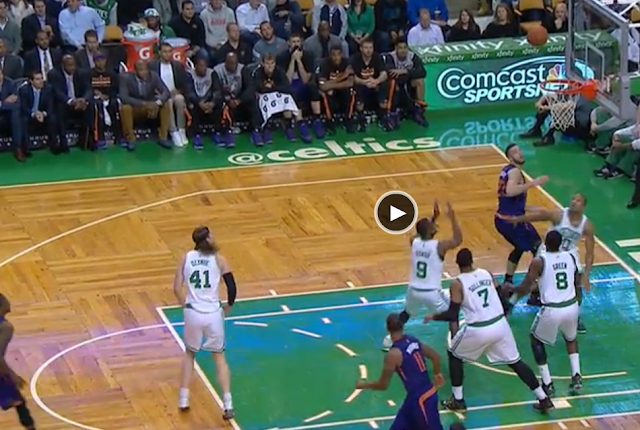 But that's not what happens. With Rondo leaving his man, he's able to interfere. And in this particular case, he's actually able to outjump the larger Plumlee, and snatch the rebound away. 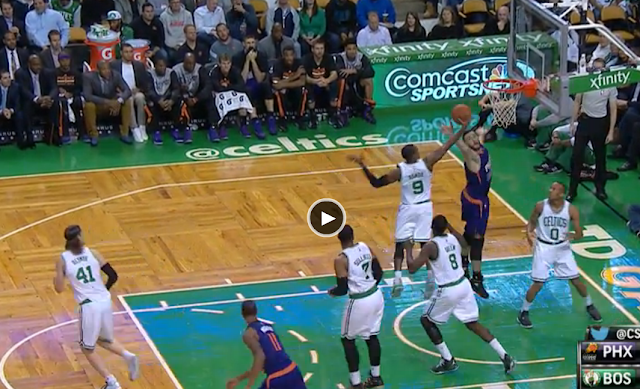 Now this might not all be necessary if Jeff Green didn't spend most of the possession staring at the ball. But that's also precisely why I think Rondo's there in the first place. Jeff Green, like most of the rest of the team, is an average to below average rebounder. The Celtics are frequently undersized, and could probably use all the help they could get.

And it's proven to be successful so far. While it's still very early in the season, the Celtics currently rank third in the league in rebound rate with 52.3. They're also considerably better with Rajon Rondo on the court (53.5) then they are without him off (50.4, which for reference would be the 13th best rebounding rate in the league).

That doesn't mean Rondo's rebounding has been all sunshine, unicorns and rainbows. There's a definitive downside to Rondo's rebounding efforts. His tendency to gravitate towards the paint means that he's often leaving a lot of space between he and his man. So while the rebound against the Suns was fantastic, it could've led to a real disaster had Eric Bledsoe made the right play and passed out to Goran Dragic. 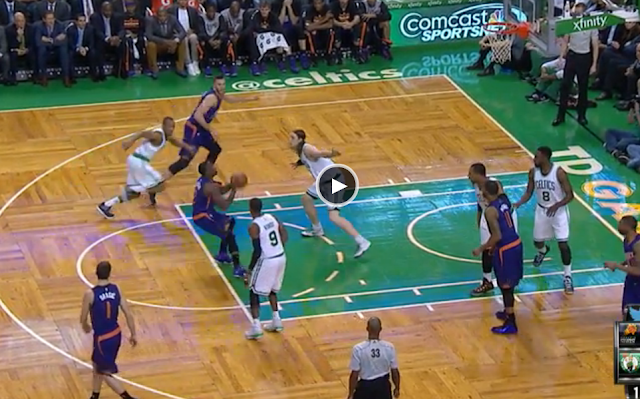 Rondo already has a tendency to be a little lazy on defense, shifting his attention to rebounding only makes things worse. It's also not just an issue on the shot, it's also a major issue if the Celtics aren't able to grab the rebound. Rondo being in the paint, generally means his man is somewhere around the three point line, often with no one around him.

Let's take a look at an example against Toronto. Rondo enters the paint in an attempt to help out on a free throw miss by the ACC's All-Time Leading Scorer Tyler Hansborough. 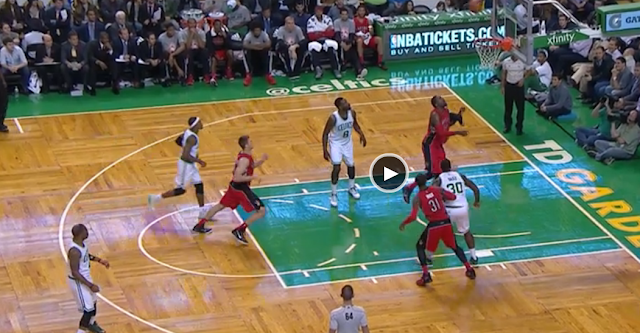 While you can't see where Kyle Lowry is in the shot, I'm guessing you can imagine exactly where he'll surface. After the miss, Patrick Patterson knocks the ball into open space. 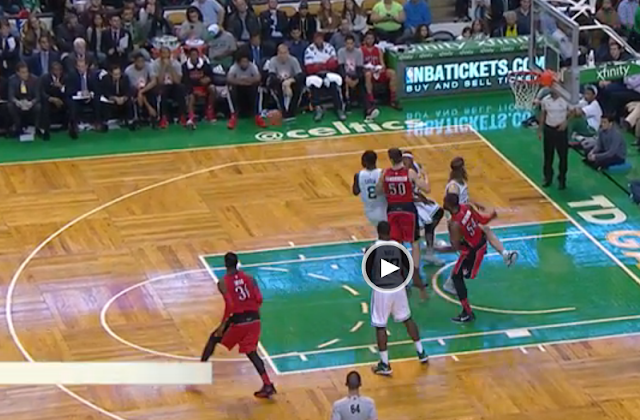 Which allows Kyle Lowry to recover the ball, and take (and convert) a relatively uncontested three point shot. A shot that he almost definitely wouldn't have been able to take if Rondo was closer to where most point guards would be after a free throw attempt. 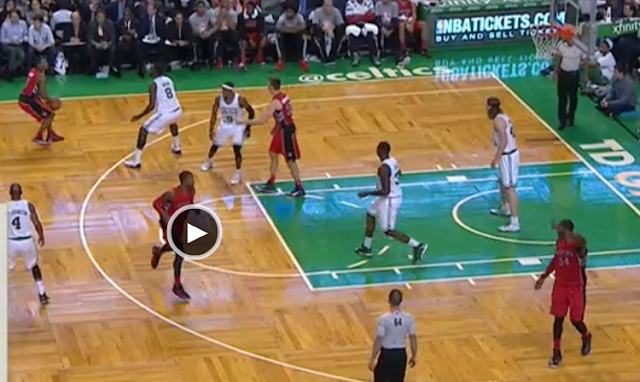 I think at the end of the day, the plusses outweigh the minuses. Rondo's help on the boards allow this team to become an elite rebounding team when they really have no right being anything much more than mediocre. In pure Rondo fashion, while there's some clear issues with doing so, I think the benefit outweighs the negatives.

There's good, bad and in between when it comes down to it. And I trust each, and every one of you to take the good with the bad, and not just focus on one extreme.