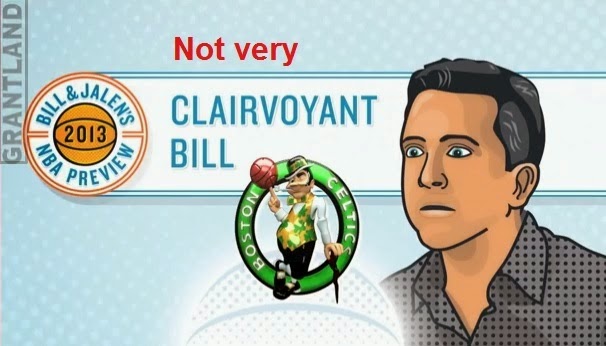 The big thing that everybody is talking about from this is that Simmons (doing his "Clairvoyant Bill" shtick at the 12:10 mark) and Rose say Rondo will be dealt to the Knicks, along with Gerald Wallace for Amar'e Stoudemire, Iman Shumpert, a first round pick and the swapping of two future picks (Brain Robb has a nice breakdown of it for Boston.com).

Besides the fact that this is not enough of a return for Boston's All-Star point guard (especially in Danny Ainge's mind), why else shouldn't you believe Simmons and Rose know what they're talking about when they say Rondo will be traded?  Three reasons:

1. Clearly they haven't been paying much attention if they think Brandon Bass is going to be starting at power forward (at 7:15).

2. They messed up the Good Will Hunting analogy (at 0:45).  This is probably worse than the Bass thing.  The reason Casey Affleck gets to run up and sit in the front seat alongside his brother is because Matt Damon (playing the part of Rondo in this scenario) is finally gone.  So why is Rondo in the car with them?  That just makes no sense.

3. Let me share with you some quotes from Bill and Jalen's Celtics preview last year:

Simmons: "Clairvoyant Bill thinks Rajon Rondo has 20 games or less left as a Boston Celtic. He will play 20 games or under this year with the 'BOS' next to it when we're looking at his career stats someday." (He's now at 30 and counting.)

Rose: "Bill, this is why we give the people what they want. What you just described is the worst-kept secret in the NBA. Once you trade Paul Pierce, Kevin Garnett; the year before you lost Ray Allen, and you lose Doc Rivers, the next obvious domino is Rajon Rondo."


Rondo is still here.  My guess is he'll still be here after the trade deadline as well.