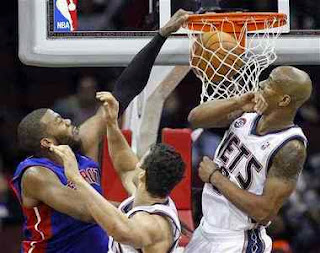 There still appears to be a huge disconnect in negotiations between the Detroit Pistons and center Greg Monroe.

Yesterday, Monroe Tweeted that he was never offered the 5 year 60 million dollar deal that the Detroit Free Press reported earlier in the week.

This from Dime Magazine:

Earlier this week we wrote about the stagnant contract negotiations between the Pistons and Monroe. In the report from the Detroit Free Press, Monroe allegedly turned down a five-year, $60 million contract and a shorter-term deal that would have paid him more per year than Josh Smith‘s four-year, $54 million deal he signed last summer. Monroe claimed on Twitter today he’s never even been offered the original five-year deal:

"@millerfootball5: Come on @M10OSE how can you reject a 5 year 60 million deal" < cant reject anything that was not offered to me...carry on

The 24-year-old Monroe is in the same boat as restricted free agent Eric Bledsoe. Both players can sign a one-year qualifying offer — for a drastically reduced rate — to remain with their teams for another year before becoming unrestricted free agents next summer. That’s the route Bledsoe is apparently leaning towards. Except doing so risks all that could transpire in the ensuing year were they to get injured or see their production drop off enough they don’t command as much on the open market next summer.

Even with the risks, it looks as though signing the 5.5 million dollar qualifying offer and becoming an Unrestricted Free Agent in 2015 may be the best route for Monroe.

Especially, considering he is reportedly not happy with his situation playing alongside Josh Smith in Detroit.

Smith is virtually unmovable because he is guaranteed 13.5 million dollars a year through 2017 which is truly one of the more regrettable and confusing signings in recent NBA memory.