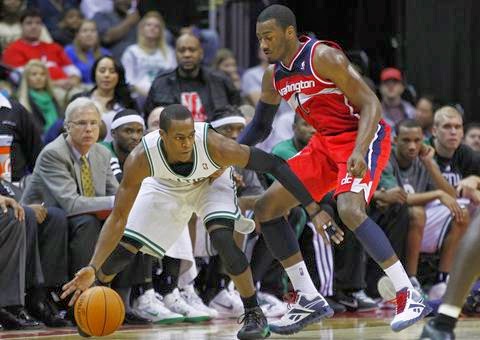 After just praising Joakim Noah recently, it appears Rondo has professed his respect of another player, this time of his own position:

Rondo on John Wall making playoffs: “It’ll be fun, exciting. Every game is on TV. Guys love to play on TV, I know I do."

Yes, we all know you love to get up for a nationally televised game, Rajon. Interesting Rajon is a fan of Wall's. I suppose it is not especially surprising as Wall shares some of Rondo's traits as an athletic, dynamic, speedy point guard who grabs a lot of rebounds and came into the league out of UK without a jumper. Wall has been an absolute beast this year as well despite not getting much attention from the media. The Eastern playoffs won't be particularly spectacular (until the ECF), but Washington's backcourt of Wall and Beal is pretty fun pretty to watch, so I have to agree with Rondo here.