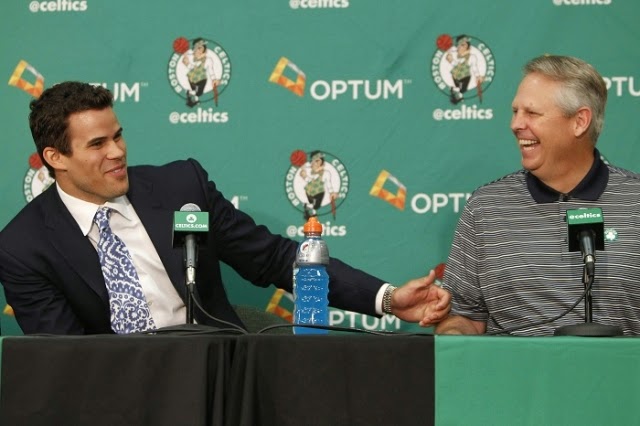 If Celtics GM Danny Ainge has his way, it sounds like Kris Humphries may be back next season and that's a great thing.

Ainge was doing his weekly appearance on 98.5 The Sports Hub's Toucher & Rich show Thursday when the the topic of keeping Humphries came up.

The quotes were transcribed by Gary Dzen at the Boston Globe.

Ainge also revealed Thursday that he had talked to forward Kris Humphries about the possibility of coming back next season. Humphries, who is making $12 million this year, will be a free agent after the season.

“I have had a few conversations with Kris," said Ainge. "Because he's been with us all year, he was with us in the summer and all this year. Kris sort of knows where we are as an organization and he knows we like him. And he knows there is a lot of uncertainty, depending on which direction we choose to go this summer. None of us now.

But he knows we like him, his coaches and teammates like him, we just can’t make any promises yet.”

Bottom line: It depends on how much Humphries wants in his next contract and whether or not Boston can squeeze him into their cap space.

Humphries has been a very nice piece in a season short on positives. Outside of the draft picks, Humphries has easily been the best piece the Celtics received from the Kevin Garnett-Paul Pierce trade with Brooklyn last summer, in terms of on the court returns. Even though Humphries didn't get much playing time in the beginning of the season, he kept his mouth shut, did his work and is now starting.

His per 36 minutes stats are quite nice. In 67 games, Humphries is averaging 15.2 ppg, 10.6 rpg and 1.6 bpg per 36. Humphries has shown he's a "lunch pale" kind of guy who does what he's asked and does it well. He'd be a great piece to have on the bench as Boston continues its rebuild.

But, as with most things basketball related, it comes down to dollars. Of course Humphries isn't going to see another $10 million-plus per year contract, but would he settle for $4 million or $5 million per year? That's not an absurd amount of money for a guy who can rebound, play team defense, score when he has to and is an asset in the locker room.

Hopefully, Humphries is back in green next season. He's not irreplaceable, but the team would miss his combination of skills and attitude as the Celtics look to get back to their winning ways.