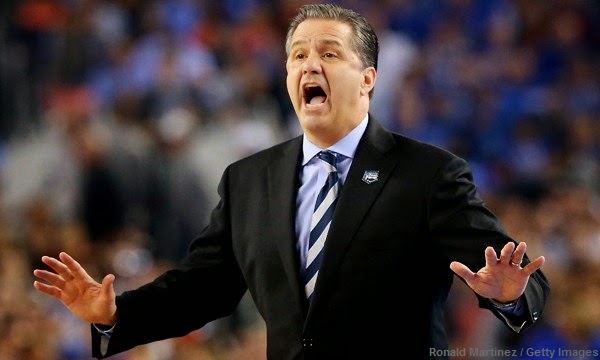 
After his Wildcats fell to Connecticut, Kentucky coach John Calipari was asked about the rumor during the postgame press conference.  He said:


ESPN reports that the Lakers are also denying the story as well, and that Chapman has since backed off from his remarks:

"No. I'm right [here] at Kentucky," Calipari told ESPN's Jeannine Edwards. "I got the best job. I've got a good group of kids. Love what I'm doing. Speculation? That's there every year I coach."

Chapman joined "The Dan Patrick Show" on Tuesday to clarify his remarks, saying he now believes Calipari is likely to stay with the Wildcats. He also said Calipari could be bargaining to get more money from Kentucky.

Calipari would be crazy not to listen if the Lakers inquire about his services.  But after an unsuccessful NBA stint with the Nets in the late 90's, he may well be uninterested in/afraid of another possible failure.