Somebody break up the winning machine that is the Boston Celtics: C's beat Sixers 114-108 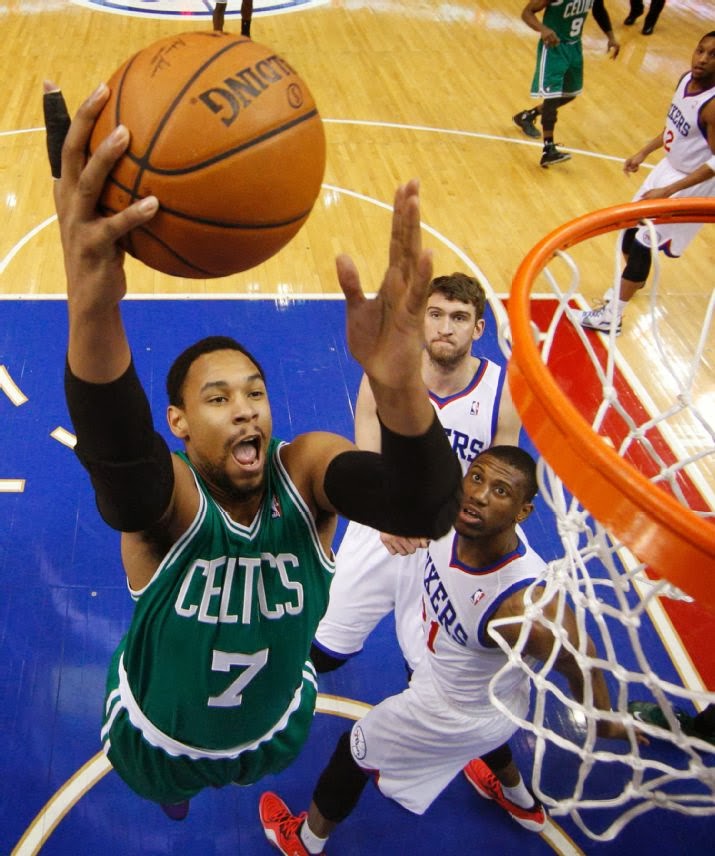 The Celtics beat the Sixers tonight by the final score of 114-108 behind Jeff Green (36 points, 8 rebounds), Rajon Rondo (8 points, 11 assists, 9 rebounds), Brandon Bass (18 points, 6 rebounds) and Jared Sullinger (19 points, 10 rebounds, 5 assists) . Of course, the win also had implications in the tank standings, as the Sixers moved two games "ahead" of the Celtics with the loss. Thankfully for the Cs they still have two more games with Philly to, uh, make up the ground.

Despite the unwanted (by many, but not all) win, there were some definite bright spots for the Celtics.

For one, Rondo is clearly rounding into form, as he turned in his second consecutive "vintage Rondo" performance. Right from the get go he dictated the pace of play, dishing out nine assists in 16 first-half minutes. The Celtics went as their All-Star did, outscoring the Sixers by 17 when he was on the floor during the first 24 minutes, and being outscored by eight while he was on the bench.

This was also the monthly (or maybe biweekly?) "Jeff Green plays like a dude worth every penny of his contract" game, as Green shot the absolute lights out (11-18 FG, 5-7 3 PT) on his way to a 36 point game. The most frustrating part of Green's game is that he's not aggressive on a regular basis, because when he is aggressive, he's actually pretty damn good. We saw that tonight as he got to the free throw line 12 times, but now the question becomes: when will we see it again? (Likely answer: in 8-10 games). (Hopeful answer: in another uniform).

With the Celtics now winners of two in a row, clearly there are some nervous folks in tank-land. And that's partially valid. After all, if Rondo is really getting back to his former self, and Bradley and Sullinger are healthy (note: Bradley did sit out the end of this one with ankle soreness - so we'll have to see how that goes), that trio alone is good enough to beat some bad teams. But don't fret too much at this point. The Celts have beaten the second and third worst teams in the NBA, and are still only 2-2 since starting the softest part of their schedule last week against the Knicks. The Celtics still have a few games against the dregs of the league coming up (namely vs the Kings and Bucks), but then they head out to the West Coast (Celtics record on the road vs the Western Conference: 0-9) and the schedule again toughens up.

Would it help the cause if Danny Ainge could find takers for Bass or Green? Absolutely. But in the meantime, sit back and enjoy the core guys playing pretty well together. Hopefully the Rondo-Bradley-Sullinger trio will eventually win games that actually matter together, but for now, this is all we've got.

Next game: Friday night at home vs Sacramento.