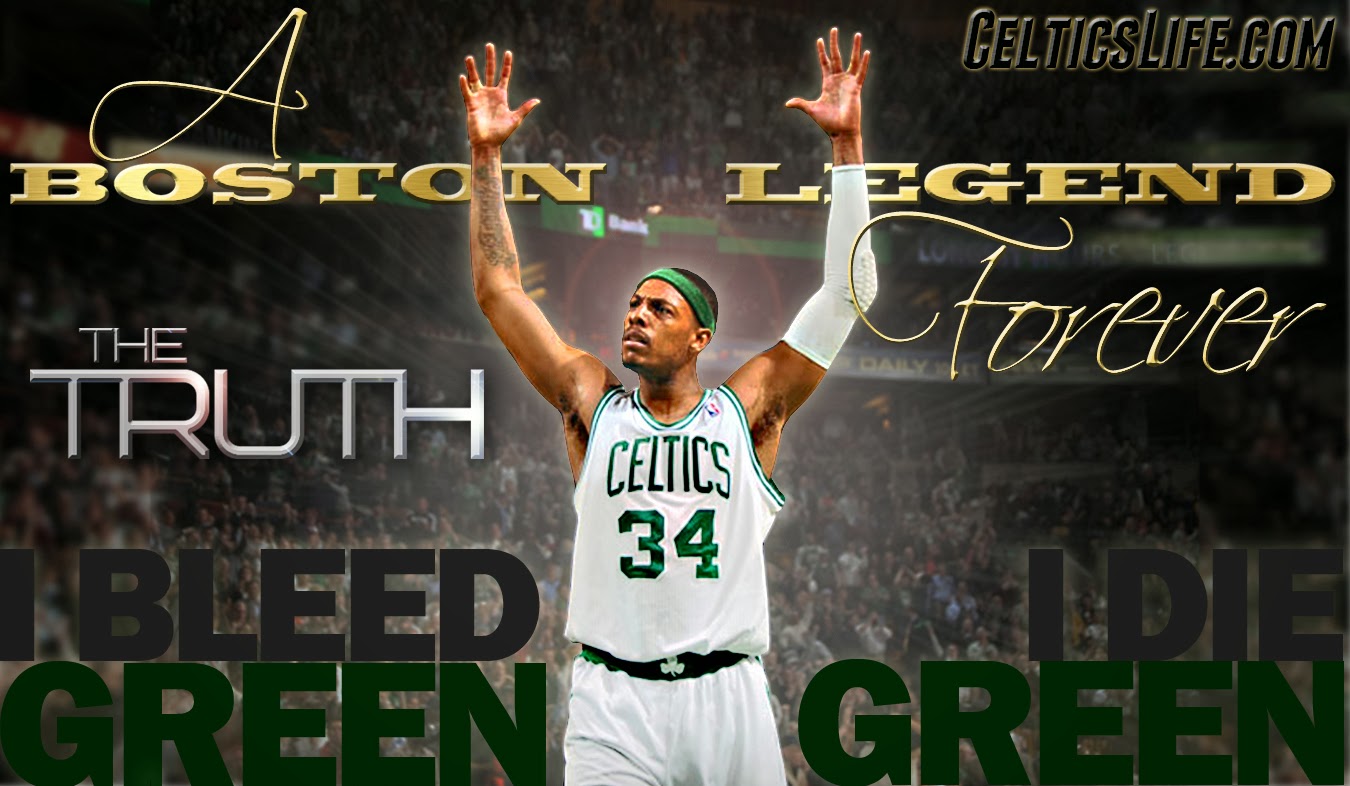 Home to the place where they spearheaded a special run, and each won the first (and thus far only) title of their career.

If you want to know how I feel about Garnett, you can read this article that I wrote last month. As for Pierce, here's a little something I wrote back in July after the trade became official. Both are amongst my five favorite athletes of all-time, and when they return today, it's going to be a bit emotional.

So to celebrate them, I thought we could look back at the best moments of their Celtics career. Earlier it was KG's turn, now it's Pierce's. Warning: This list was impossible to make, as Pierce spent 15 seasons here and had a ton of special moments. Here's my best effort.


In March, 2001, Paul Pierce had not quite arrived on a national level. He had not yet made an All-Star team, the Celtics were bad, and his all-around game was still developing.

All of that changed thanks to one monster game in LA.

Pierce scored 42 points on just 19 shots, one of the most efficient games of his career. He added six boards and four steals, helping the Celtics push the world champion Lakers to the brink before LA came out on top. It was Pierce's breakout performance, as the 42 points matched a career high at the time.

But considering it was not a nationally televised game, it could have slipped through the cracks. Just a nice performance to watch on the 1 am edition of Sportscenter.

At the time, Shaq was the best player on the planet. He was the defending regular season MVP, and soon to be back-to-back NBA Finals MVP, and the big man was impressed by Pierce. So much so, that he gave him one of the best nicknames in recent NBA history.

Pierce's confidence spiked afterwards, as he averaged 28.2 points per game over the last 19 games of the 2000-01 season, going over 40 three more times. In many ways, that's the night Pierce made the leap from "good young player", to "franchise cornerstone".

Perhaps the most underrated Pierce moment of all-time occurred during the somewhat forgotten 2003 playoff run.

A year after advancing to the Eastern Conference Finals, the Celtics were disappointing during the 2002-03 regular season, finishing 44-38 and entering the playoffs as the 6-seed.

Once in the post-season, the Celts took on a good, young Pacers team just a year away from winning over 60 games. They were not expected to win.

But Pierce went off, averaging 26/9/6 in the six game series win, including 40 points in a Game 1 win in Indiana.

But it was his Game 4 performance at the Garden that will always stick out. 37 points, 10 rebounds, 7 assists, and one absolute dagger to the heart of Indiana.

The Celtics led the series 2-1, and Indiana was on the ropes. Teams just don't come back from 3-1 series deficits, and the Cs were, for all intents and purposes, attempting to finish them off.

The game was tied at 62 apiece when Pierce put it in high gear. The Celtics went on a 15-2 run, with #34 scoring all 15 points. The cherry on top? With the clock running down in the 3rd quarter, Pierce began jawing with Al Harrington at the top of the key. Pierce was just standing there, squawking back and forth with Harrington while keeping one eye on the shot clock. And then, from about 26-feet out, he launched his patented off-balance "this should not go in" three from the wing. Splash. Game over. Series over.

Another one from the way back files took place on December 1st, 2001. The Celtics were on their way to their first playoff appearance since 1995, but no one knew that at the time. They had started the season 7-6, and were taking on the 10-5 New Jersey Nets, who had suddenly morphed into a really good team with Jason Kidd in town.

And then the second half started, and Pierce got as hot as he's ever been. 33 points in third/fourth quarters, plus 13 more in overtime, giving him 46 in the second half alone. Had Pierce had even a decent shooting first half he may have gone for 65. Instead he had to "settle" for a then career high 48, and a gutsy overtime win in New Jersey.

Unlike the above Nets game, everyone remembers this one. Game 3 of the Eastern Conference Finals in 2002, series tied 1-1. The Celtics fall behind the Nets by 26 points in the 3rd quarter, and this thing is over. No team in playoff history had ever come back from such a large playoff deficit.

Pierce scored 19 points in the fourth quarter, willing the team back with help from Antoine Walker, Rodney Rogers and Kenny Anderson. The Celtics ended up winning 94-90, finishing the game on an absurd 55-25 run over the last 20 minutes.

Boston didn't win another game that season, but Pierce's legacy as a playoff closer was fortified. Highlights from this one still give me chills 12 years later.


6. Coming back from the stabbings

Before the title, before the comeback vs the Nets, before he made an All-Star game, before 'The Truth' - Pierce's career, and his life, nearly ended.

Somehow, major injury was avoided, and major arteries were not impacted (some thanks go to the leather jacket he was wearing). Five weeks later, Pierce was on the court for the Celtics opener.

Say what you want about the whole wheelchair Finals thing, and some of Pierce's theatrics while trying to get calls, but not missing a single game after getting stabbed 11 times will forever put Pierce in the pantheon of tough Boston athletes.

As much as I whined about the Celtics becoming too predictable in the last 20 seconds of close games (Pierce iso, Pierce iso, maybe another Pierce iso), this guy came up big so frequently that I can't really blame the Cs for going to the well so often.

Along the same lines as the ones above, but this dagger deserves it's own spot on the countdown. I know the Celtics lost the series eventually, but as I said in the KG countdown earlier, the 2012 Celtics were a team to be immensely proud of. They were old, injured and overmatched (both talent wise and also by the officials), but refused to give an inch to the eventual world champion Heat in the Conference Finals.

They won two crucial games in Boston to tie the series after falling behind 2-0, and then returned to Miami for Game 5. They trailed by double digits early on, slowly carving away at the deficit and eventually taking a small lead.

But the Heat were still in position to win. They trailed by only one with a minute to go, and one stop would have given the ball back to LeBron and Wade with a chance to go ahead.

However, for the 6,000th time in his career, Pierce stood at the top of the key, patiently waiting for the shot clock to hit five, and then made his move.

At this moment, it really seemed like the Celtics were going to shock the basketball world and head back to the Finals. Of course, what followed was LeBron's break out party as a legit all-time great. But for one last time during the 'New Big 3' era, the Celtics were the center of the NBA universe. They lost the series, but you knew they left everything they had on the court. Not sure what else you can ask for from a team.

While the 2012 match-up with LeBron ended in sadness, the 2008 match-up was the exact opposite. In this version, the Celtics were the heavy favorites who just could not seem to escape the underdog Cavs.

Cleveland not only forced a Game 7, but found themselves in a dog fight with the Celtics late in the deciding game.

But while LeBron was brilliant, Pierce matched him shot-for-shot, dropping 41 points on the Cavs in what was perhaps the most important game of his career. If Pierce had been merely good in this one, there's a legitimate shot he (and the rest of those Celtics) never win a title. Instead, he was magnificent.

And no point was more important than Pierce's 40th, a free throw that put the Celtics up four with eight seconds left, sealing the win. Only it wasn't that simple. Pierce overshot, hitting the back rim and launching the ball about 300 feet in the air. Everybody held their breath.

And then it rattled in, Pierce smiled, and the Celtics were heading to the Conference Finals.

As great as 1998-2007 Pierce was, he was not considered an all-time Celtics great for one simple reason:

He didn't have a title.

Every other all-time great Celtic did, and to be considered a top ten player in franchise history Pierce needed his ring.

Once Garnett and Ray Allen joined him in Boston, it was clear he'd have his chance. The 2007-08 team was record setting, winning 66 games and outscoring their opponents by the widest margin since the 1998 Bulls.

But come playoff time, they were a little off. They took seven games to finish off the Hawks and Cavs, with Pierce needing to play hero in Game 7 vs Cleveland as we just discussed.

Even after beating the Pistons in the Conference Finals, public sentiment had swayed. The Lakers, who had gone 12-3 in the playoffs to win the West, were suddenly favorites, despite the fact that the Celtics would have home court.

Playing his hometown team with his legacy on the line, Pierce again came up big. He averaged 22/6/5, and helped hold Kobe Bryant to just 40% shooting on the other side of the ball.

Pierce had better series in his career, but never a more important one. Either him or KG could have won Finals MVP and no one would have complained, but Pierce got the nod, cementing his place in Celtics history.

Not a game, not a game, but a ring ceremony. Best Pierce moment ever. This just meant more to him than anyone else, and it showed. Ten seasons of frustration, near tragedy and losing disappearing all at once. He deserved to have this moment in Boston.