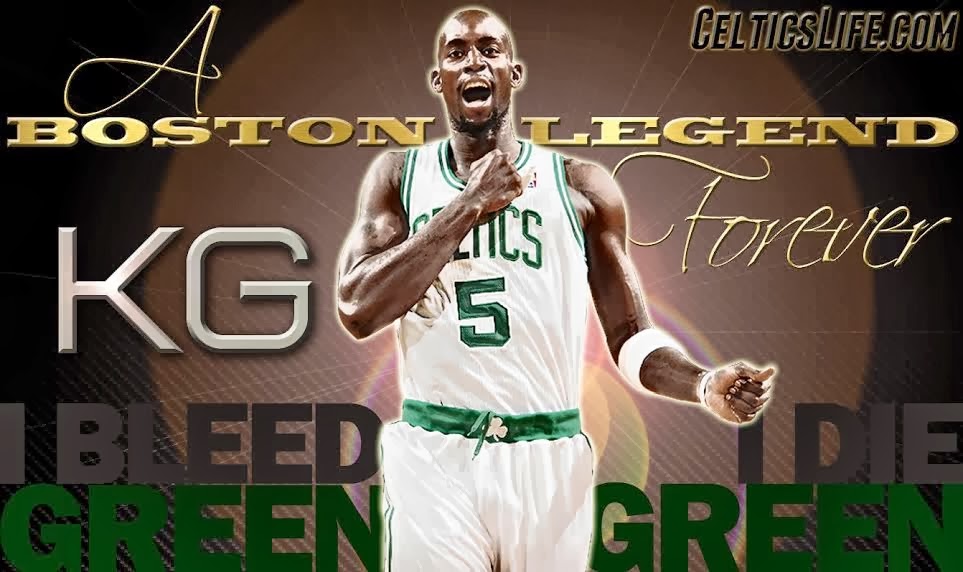 Home to the place where they spearheaded a special run, and each won the first (and thus far only) title of their career.

If you want to know how I feel about Garnett, you can read this article that I wrote last month. As for Pierce, here's a little something I wrote back in July after the trade became official. Both are amongst my five favorite athletes of all-time, and when they return today, it's going to be a bit emotional.

So to celebrate them, I thought we could look back at the best moments of their Celtics career. Starting with KG.

The first series the 'New Big 3' era Celtics ever played together was perhaps the scariest. After winning 66 games in the regular season, the Celtics just could not finish off the measly 37-win Atlanta Hawks. Atlanta won all three home games, forcing a deciding Game 7 in Boston. While the Celtics were heavy favorites, there was immense pressure on them to beat Atlanta and advance to the second round.

Garnett was masterful, scoring 18 points and grabbing 11 boards in only 27 minutes, helping the Celtics build a 40-point lead before getting ejected for destroying Zaza Pachulia with a pick at half court.

It was the first of nine elimination games Garnett would play in for the Cs — and he came to play in a big way. 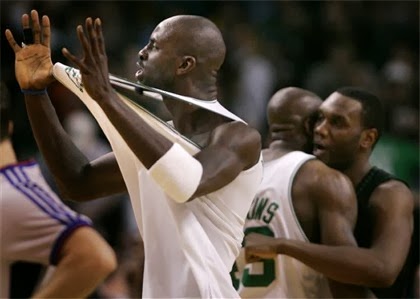 I can't tell you for sure exactly when it happened for the first time, but I have a guess: January 2nd, 2008 vs the Rockets.

That's when I first remember KG pulling the jersey out, showing off the stitched "Celtics" for all to see.

That game, a 97-93 win, improved the Celtics to an absurd 27-3, and after a late game And-1, Garnett pulled at his jersey while screaming at the top of his lungs, sending the crowd into a frenzy. I can remember watching KG and thinking: "this team is going to win it all this season, and it's because of him".

The jersey pull was KG personified: Intensity, showmanship, and team.

P.S. To be clear, not talking about KG's traditional "pull the jersey to the side and pound his heart" move before games, but instead the pull the jersey straight out while screaming like an absolute mad man

How could the intro not be on the list?

Unlike the Heat Big 3, the Celtics trio came together came together in an understated manner. Three future Hall of Famers, two sliding on their Celtics jerseys for the very first time, all beyond excited for a new era of basketball.

Garnett was at the center of it all, and while he didn't do it by himself, he was the single biggest reason the Celtics went from 24-wins to World Champs. And it all started on that stage, and with this commercial.

People forget, but Garnett was not himself for the entirety of the 2009-10 season. He had trouble bouncing back after undergoing knee surgery at the end of the previous season, and saw his numbers fall off precipitously.

With KG's reduced impact, the Celts limped to the finish line in 2010, finishing the regular season just 27-27 after a 23-5 start. When the playoffs began, Boston was the 4-seed, and not expected to make it past the second round of the playoffs.

But then, the Celtics came to life, knocking off the Heat, Cavs and Magic en route to a Finals rematch with the Lakers.

Once there, the teams alternated wins for the first four games, setting up a pivotal Game 5 in Boston. Garnett was fantastic, finishing with 18 points, 10 rebounds, 5 steals, 3 assists and 2 blocks while completely neutralizing the Lakers front line. Combined, Pau Gasol, Andrew Bynum and Lamar Odom finished with just 26 points in 96 combined minutes. Garnett was dominant, and the Celtics were one win from a second title. And then the NBA canceled the rest of the series..at least that's how I remember it.


5. Starting off with a bang

After the 18 game losing streak and eventual 24-58 final record in 2006-07, and then missing out on Oden/Durant, Celtics fans were desperate to watch a good basketball team.

And once the team acquired KG and Ray, we were pretty sure we'd be doing that. But we were unclear exactly how good the team would be. Would they be the 3-seed (their projected finish in the pre-season)? Would they be title contenders? Would the trio be a massive flop? We did not know.

(This was the intro played in the Garden before the opener vs Washington. I swear when KG screamed the world stopped spinning for a moment. Pretty sure I blacked out).

No, knuckle push-ups do not win you games on their own. But part of what makes Ticket, Ticket is his flare for the dramatic, and the ridiculous intensity level that he seemingly always has on display.

So when Garnett went to the floor after a hard foul in Game 3 of the 2012 Eastern Conference Finals, we first worried he may be hurt. The crowd stood up and waited to see what happened next.

Garnett slowly turned over, and then pounded out eight push-ups, turning the crowd from concerned to fired up. The Celtics were up four at the time, and would go on to win that game, and the next two against the Heat. It was a cool moment, one that will stick with Celtics fans forever.

Speaking of the 2012 Eastern Conference Finals, that was the Celtics last hurrah. Sure, Garnett, Pierce and Doc stuck around for one more year, but Rondo was hurt, Ray was in Miami, and the team wasn't very good.

2012 was the last time we saw the Celtics of this era go to battle against LeBron, and damn it, they left everything they had out there.

They lost Games 1 & 2 in Miami, the latter of which was one of the worst officiated games I've ever seen. You may remember when Rondo got his head knocked off and it was not called a foul. Or when LeBron shot 24 free throws in one game. 24. As in a 2 and a 4 directly next to each other.

At that point the Celtics could have quit. The team's bench was being held together by duct tape, led by not-so-good basketball players like Mickael Pietrus and Keyon Dooling. Avery Bradley had been shut down for the year, and Pierce (knee) and Allen (ankle) were playing hurt. That team was toast.

But they found a way, mostly because of ridiculous efforts by Rondo and Garnett. The team won both Games 3 & 4 in Boston, setting up a must win Game 5 in Miami. The Celtics, and their fans, knew that they couldn't win a Game 7 in Miami. Not with the refs giving the Heat the benefit of the doubt, and not with the best player on the planet playing against them. It was either win it in six, or not win it at all.

With that in mind, KG left every shred of himself on the court in Game 5, scoring 26 points and grabbing 11 boards, and helping hold Miami to just 39% shooting. The Celtics won by four, with Pierce hitting the "Cold blooded" three to seal it. But the only reason Pierce had that chance was KG. The Celtics fell short in that series, but for one last time Grit & Balls were on display.

2. The And-1 that brought the roof down

Ok, enough about series that ultimately went to the other team. How about some not-so-bittsweet memories?

Game 6 of the 2008 Finals, the exclamation point on the greatest worst-to-first finish the NBA has ever seen. The Celtics obliterated the Lakers, winning their 17th title on their home court. And like he had been all season, Garnett was front and center.

Little known fact about the Celtics 39-point win to clinch the '08 title? The Lakers actually started out pretty decent, leading 17-16 early on. Then Garnett scored six straight points to give the Celtics a lead for good. But LA hung around a little longer, trailing only 32-29 halfway through the second quarter when KG re-entered the game and scored seven points in the last 4:08 of the half. By the time the "Slingshot And-1" went through, it was 56-35 and the Lakers' souls were crushed.

Pierce was the MVP of the series, and it was well deserved. But KG was the guy who actually broke the Lakers' will for good. Never forget that.

Per usual with lists, there is room to debate. Some things may be too high, others too low. Maybe I missed a few as well.

But one thing there's no debating is how important Garnett was to this franchise for six seasons. Pierce was the foundation, but KG changed the culture. And if Garnett retires at the end of the season (which is a distinct possibility), tonight will be the last time he ever plays in Boston. Time to send him off right.