For Paul Pierce, Kevin Garnett, and the Garden crowd, it was a game unlike any other 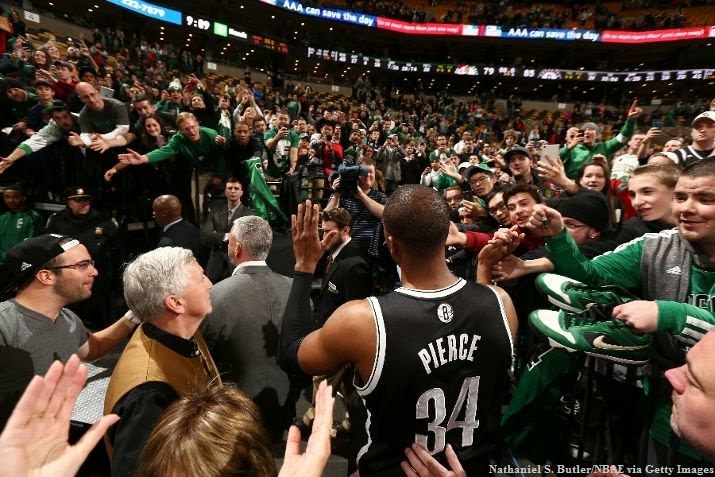 For the first time in a very long time, the TD Garden crowd was in their seats even before the national anthem began last night.  Normally the visiting lineup is announced immediately after with little fanfare, but not on this occasion.  The lights turned off and the entire building rose to their feet in anticipation.  When Kevin Garnett's name was called the arena exploded, and the PA announcer delayed naming Brooklyn's final starter.  He could have waited ten minutes if he'd wanted to, there was no way the volume was going to die down before Paul Pierce came out onto the floor (however the following announcement of Nets coach Jason Kidd turned the noise to boos).


Out of respect to the current Celtics we remained standing for their starting lineups as well, but it felt like a bit of a formality. When the game finally began there were loud cheers every time Pierce and Garnett touched the ball.  Their excitement and nervousness was likely a factor as each of them missed their first several shots from the floor, with KG not making a basket until there were 4 minutes left in the second quarter, and Pierce not scoring until after halftime.

During a timeout with three minutes remaining in the first quarter the crowd again went nuts for Garnett's tribute video.  When Pierce's came on the screen shortly thereafter at the break between quarters, it was very nearly more than we could handle; I almost wished I'd had more time to get my emotions back in check.  What followed was the longest standing ovation I have ever been a part of.

Paul Pierce: "This was the toughest game I ever had to play." pic.twitter.com/V37LGctAip
— Sean Deveney (@SeanDeveney) January 27, 2014

As the final seconds ticked away in the first half Brooklyn gave the ball to Pierce for what could have been another of his signature run-out-the-clock-step-back-jumpers (and his first hoop back at the Garden), but Brandon Bass fouled him with 8 seconds left.  It was the angriest I've even seen Celtics fans get with one of their own players for failing to allow an opponent to shoot.

The second half was largely inconsequential, with the loudest cheers probably coming for Pierce and Garnett as the visiting team exited the floor after the final buzzer, another TD Garden oddity.

Last night's game was one of the greatest sports moments I've ever witnessed, and the game itself didn't even matter.