Should the Celtics get in on Toronto's apparent fire sale? 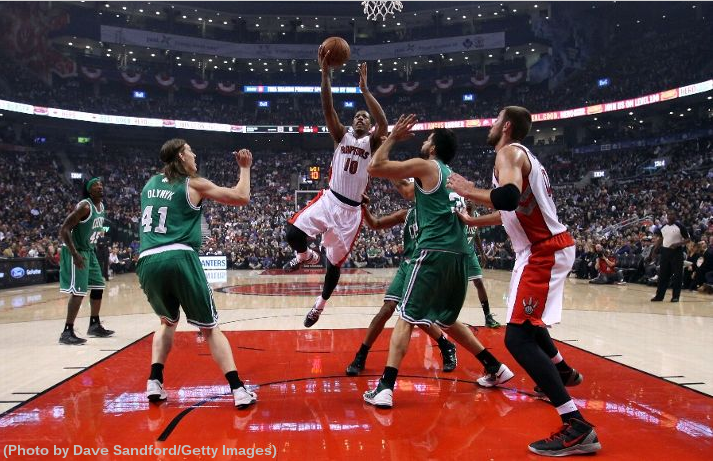 Toronto looks to be in an all-out salary dump after sending Rudy Gay to the Kings for a whole lot of mediocre players. Earlier this year, the Raptors sent Andrea Bargnani to the Knicks for the ghost of Marcus Camby, Steve Novak and a 2016 first round pick.

The Celtics must be able to get in on this action given all their assets. The two most attractive chips for Toronto would be Kris Humphries' expiring $12 million and the $10 million trade exception Boston received for Paul Pierce, meaning they can take around $22 million worth of contracts off the Raptors, or any other team's, books for pretty much nothing. Not to mention the plethora of first round picks the team owns between now and 2018.

But is there anyone on their roster Boston would want? It appears they're all available.

The best player on the team said to be available is Demar DeRozan. Kyle Lowry is said to be up for grabs too, but he's on an expiring deal so the Raptors are going to want something good in return for him and he doesn't really fit what Boston needs since they are awaiting the return of Rajon Rondo. Jonas Valanciunas is a nice, young, cheap piece, but is said to be the player the Raptors actually want to build around.

DeRozan on the other hand is signed until 2017 with a contract that pays him $9.5 million per season and a player option in 2016-2017. That $38 million albatross around the team's neck is probably something Toronto GM Masai Ujiri wants to get rid of as soon as he can.

If there is one thing DeRozan can do, it's score. After his rookie season, DeRozan has averaged 17.2, 16.7, 18.1 and is currently averaging 21.6 ppg. He's not the best three-point shooter with a career shooting percentage of 26.3, but DeRozan has been on fire from downtown this year averaging 35.7 percent so that may be a new facet to his game. At just 24 years old, he certainly has time to develop even more.

DeRozan is listed at 6'7" so he could possibly play either SG or SF. The problem would be where to insert him in the lineup. If he's the team's future off-guard then Avery Bradley would have to be gone. Bradley is a restricted free agent after this season and some team will offer him a starting job paying starter's money, both things he would not get in Boston with DeRozan on the roster.

If DeRozan is the small forward of the future, then Jeff Green would have to be sent out of town before DeRozan arrived. With all the hype surrounding Green needing to prove his worth this year, since he's far and away the most talented player on the squad with Rondo out, there is no way he could coexist with the guy brought in to replace him because he couldn't cut it. The Jeff Green experiment would have to be over. The Celtics would take a hit getting back a fraction of what they could for Green without the sense of urgency, but teams would know Green has to go and would offer pennies on the dollar for him.

Does DeRozan make the team better now or in the future?

Depending on where he plays, DeRozan probably wouldn't make that big of a splash this year. If he's kept at off-guard then the team loses Bradley's defensive prowess, but gains DeRozan's scoring. If he's remade into a small forward then this team may snatch up a few more wins for a push into the playoffs. DeRozan is a more consistent scorer and a better passer than Green. And for all of you wanting a player as explosive to the rim as Green, watch this:

As for the future, the team would have a starting lineup of Rondo, Bradley, DeRozan, Jared Sullinger and (insert center here). Depending on how the Celtics fill out their center spot, either by trade, draft or going with smaller lineups with Kelly Olynyk, that team seems pretty well balanced. You'd have Rondo throwing alley oops to DeRozan all night and Bradley and Sullinger's defense to even it out. Does it get the team closer to contending again? Yes, but it doesn't move the needle very much. DeRozan is an upgrade over Green, but it's not like the team is getting back an all-star. More moves would have to be on the way before banner 18 is in sight again. Trading for DeRozan would essentially be adding what should be the team's third best player when contending again. They would still need a player as good as or better than Rondo to get back to the mountain top.