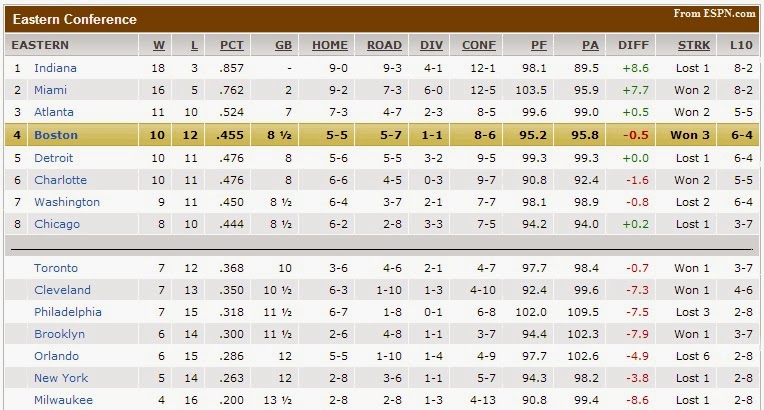 You'd be hard pressed to find anyone who's pleased that a 10-12 team is currently residing in the 4th spot in the Eastern Conference playoff standings.  Although at this point Boston's 3 game winning streak does have the C's just half a game behind Chicago and Detroit (the 5th/6th seeds) record wise, they're still ahead of them by rule due to the fact that the Celtics are the Atlantic Division leaders.  It's possible whoever does end up winning the Atlantic this year could actually have a worse record than the team that finishes in the 9th spot in the East.

Hypothetically, what if a Cleveland Cavaliers team with a 40-42 record fails the make the playoffs because the Celtics are a "Division Champion" at 37-45?  That would be an NBA first since the league when to a 3 division format.  And since teams don't play their division rivals any more often than the rest of the conference, what's the point of even having them?  Future commissioner Adam Silver (David Stern is retiring Febuary 1st) realizes this, and said as much during an interview on the Sirius XM NBA channel today:

"I mean, Steve [Kerr] and I were talking basketball the other night out in Brooklyn and [he] raised the same question with me about whether divisions have outlived their usefulness. One thing I have learned from David [Stern] over all those years…one thing he taught me and all of my colleagues at the NBA is every day we should wake up and take a fresh look at everything we do. And I think divisions fall into that category. Obviously historically, based on geography in terms of weighted schedule and convenience of travel, the goal was to enhance rivalries and I’m not sure if that’s still what’s happening and so that’s something I’m sure that the competition committee, when it next meets, will be taking a fresh look at.”


Considering the fact that any time you see the standings printed anywhere they are listed by conference, I'd say it's pretty obvious the divisions aren't significant anymore.  Although I guess teams outside of Boston do actually hang "Division Title" banners...