"I bleed green, I die green, that's what it is" - the legacy of Kevin Garnett in Boston 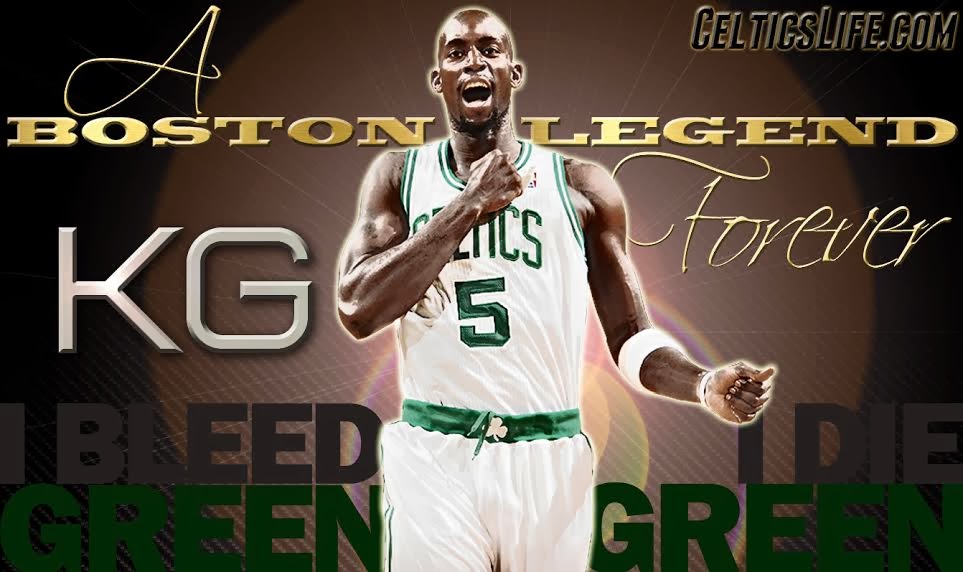 I bleed green, I die green, that's what it is

Loyalty is a dying commodity, especially in sports. Sports are a business, and loyalty gets in the way of that. In Boston we've seen that with Ray Allen, Jacoby Ellsbury and Wes Welker in recent years. Those players liked Boston, but when a better opportunity arose - they jumped on it. Which is absolutely their right.

That's why when the Celtics traded both Paul Pierce and Kevin Garnett back in July, it cut so deep. They weren't just trading the aging players for the picks, which even the staunchest Pierce and Garnett supporters would admit was a good deal. But they were trading two of the most loyal players in all of sports.

Back in July I wrote about the departure of Pierce, and how the Celtics were leveling the foundation on which the franchise had lived for a decade and a half. Now, with the first game against the Nets just a few hours away, it's time to take a look back at the legacy of the other legend shipped off in the deal. The three pillars of the Kevin Garnett era in Boston.

Garnett's entire career can be defined by an unwavering loyalty. First to the Timberwolves, and then to the Celtics. Remember, this is a guy who at first said no to a move to Boston. Even though the Celtics had Pierce, if KG was going to leave Minnesota, it needed to be perfect. Once the Cs acquired Allen from the Sonics, Garnett finally relented and agreed to the trade (and contract extension).

Once he got here, it seemed like this had been his home for all his life. Over the last few seasons of KG's tenure, the trade rumors began popping up. And every time he dealt with them the same way. It's a business - but this is his home. And he wasn't going anywhere.

Finally in July, with Doc in LA and Pierce included in the deal, he agreed to head to Brooklyn. But watching him this season, it seems as though he left a lot of his trademark passion in Boston. At the age of 37, he hasn't been able to channel the same level of intensity that he was able to with the Celtics. And I think a lot of that is related to the fact that he doesn't feel the same loyalty towards Jason Kidd, his new teammates and his new fan base as he did towards Doc, his Celtics teammates and the city of Boston. And an old KG without the same fire has proven to be a shadow of his former self.

Garnett did not create Celtics pride..not by a long shot. That honor belongs to Red, Cousy and Russell. But boy did he bring it back. As great as Pierce was, the Celtics were a dormant franchise throughout the first nine years of his career. Occasionally waking from their slumber ('02 vs New Jersey, '03 vs Indiana), but never finding any consistent success. Just months before Garnett came to Boston, the Celtics had perhaps their lowest moment in franchise history, a team record 18 game losing streak during the hideous 24-58 campaign in 2006-07.

But the moment Garnett arrived - it all changed. Obviously he had help in Pierce, Doc, Ray and others, but he was the driving force behind the culture change in Boston. He was their vocal leader and defensive backbone (more on this in a minute), and the center piece of the team's Ubuntu philosophy (Doc came up with it..but Garnett enforced it). Repeatedly during the 2007-08 championship run, he'd make a big play, and then pull on his jersey, showing off the "Celtics" stitching and getting the fans fired up.

It's fair to ask - how much does pride mean? And it's a great question. After all, if the Celtics aren't good, how much pride they have doesn't mean much. But in the case of the KG-era Celtics, it seemed to bring them to another level. As good as that 2007-08 team was, no one predicted them to become one of the best teams in recent NBA history (a solid argument can be made that that was the best team since the '98 Bulls). In the pre-season, they were predicted 3rd in the East by many (behind the Pistons and Cavs), and they were underdogs in the Finals against LA according to Vegas. It was a team who outplayed their talent level because of how hard they played, and how much they cared for both one another and seemingly, the city. And that became a staple of the Big 3 era. In 2009 they advanced to Game 7 of the Conference semifinals without Garnett, in 2010 they came within six minutes of a title after finishing the regular season as the 4-seed, and in 2012 they brought Miami to the brink with guys like Ryan Hollins, Greg Stiemsma and Keyon Dooling playing important roles. Something caused those teams to consistently out play their level of talent and overcome what seemed like a major injury every year. And Garnett was at the center of it.

As important as the intangibles that Garnett brought to the table were, the tangibles were pretty damn important as well. While his scoring decreased during his time here, he still managed to average at least 14.3 PPG in all six of his seasons in Boston, and never shot below 49.6% from the field or 78.6% from the line.

He also rebounded as well as nearly any player in the league, grabbing 9.8 rebounds per-36 minutes over his run with the Celtics. KG has never been a prolific offensive rebounder, instead choosing to get back on defense. But he's one of the best defensive rebounders of all-time, grabbing 26% of all available defensive boards over the course of his career, and 26.2% of them while in Boston. In fact, this is one part of KG's game that remains as strong as ever, as he is currently grabbing an NBA best 31.2% of the defensive rebounds available during his time on the floor for the Nets. At 37-years-old.

But the biggest impact Garnett made was on defense, where he helped turn the Celtics from below average, to historically great.

During his first season in Boston, surrounded by two All-Stars known for their offensive skills (Pierce and Allen), two very young, raw starters (Perkins and Rondo), and a host of role players (James Posey, Tony Allen, Leon Powe, Glen Davis, P.J. Brown), the KG-led defense allowed only 0.989 ppp, the best number in basketball. Opponents shot a horrific 41.9% from the field against the Celtics that season, also #1 in the league.

Obviously there were other good defensive players on that team, not to mention Doc is a defensive minded coach. But Garnett made by far the biggest impact. With Garnett on the floor that season the Celts allowed only 0.971 ppp, and opponents shot under 40% from the field. Basically, he turned every member of every opposing team into Sebastian Telfair. And that defense brought the Celtics their 17th championship.

Even as he got older, the impact KG made on that end of the floor didn't waver. At least not noticeably. Here are the Celtics' defensive ranks for his six seasons, both in points per possession allowed, and opponents FG percentage.

As you can see, it took until last season for the Celtics to fall out of the top five in either category. And even last season, the slip had nothing to do with Garnett, but instead it was the Cs inability to stop anyone when he took a seat on the bench. With KG on the floor last year, Boston gave up 0.993 ppp, a number that would have ranked ahead of the Pacers for the best in basketball. But when he was on the bench, that number skyrocketed to 1.083. A number that would have placed the Cs 28th in the league.

There is little doubt that Garnett was the best overall defensive player in basketball during his six year run here. And the numbers back that up.

There are two ways to watch sports: with your heart, and with your head. When you watch with your heart you see how a player motivates his teammates and how much passion he plays with. When you watch with your head you analyze the impact he's making on the game. How much does he score, rebound and assist? How much better is the team with him than without him? The beauty of KG was that he passes both the heart and the head test. He impacted the game in ways that stats could never measure, while also showing up in the box score in just about every way imaginable.

When the Celtics play the Nets tonight, it will be far stranger to see Pierce on the other side than Garnett. After all, we've never seen Pierce play against Boston, while we had 10 seasons worth of it while KG was in Minnesota. But this is the first time we've seen Garnett on the opposing side since he came to Boston and changed the franchise. And that will be hard to watch as well.