Why is everyone sleeping on Paul Pierce, Kevin Garnett and The Nets? Miami vs. Brooklyn preview 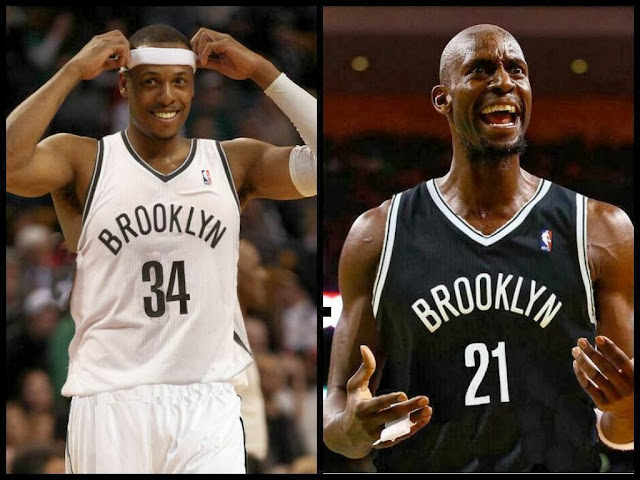 Although there were exceptions, in my estimation, based on preseason power rankings, most people are greatly underestimating The Brooklyn Nets chance at raising The Larry O'Brien trophy at the end of this season.

To my point, Marc Spears of Yahoo Sports had them at #11???? behind the likes of The Clippers, The Bulls, and especially confounding, The New York Knickerbockers.

The reason I invoke The Clippers is I'm still not sold on their championship pedigree. Sure, Chris Paul is great and showed that last night, but I just don't know that Blake Griffin and Deandre Jordan have the mental fortitude to get it done come playoff time.

Although, I was a HUGE proponent of the Doc, KG, Pierce trade for Jordan and Bledsoe this summer for The Celtics.

Now, before Celtic Nation jumps all over me, my rationale for this was Doc was already out the door and The Celtics were no longer championship contenders. Thus, Pierce and KG would get at least one more shot at a championship with their beloved coach and The Celtics received two incredibly gifted athletes to build for the future.

With regards to The Bulls, even with Derrick Rose healthy, I just have never bought them as true championship contenders. Rose is extremely talented but having one player dominate the ball that much and lead his team to a championship is a lot to ask for.

He's also not built for playoff basketball even though the league office is making a mistake by taking away some of the physicality of the game on a yearly basis which works in D-Rose's favor.

The Knicks? Come on. In the immortal words of Knick fan John Mcenroe: "You cannot be serious!"

New York has some talent but are in no way in the conversation as title contenders and The Nets are.

In fact, the only three teams in the league in my opinion that you could definitively put above this Brooklyn team in the preseason rankings are The Heat, because they are the two time defending champs and have Lebron.

The big question mark with Miami will be on D-Wade's performance.

The Spurs can be projected ahead of Brooklyn just out of respect of what they accomplished last season.

And finally, The Pacers, because of what they can do on the defensive end (30 blocks first two games) and their youth who received invaluable playoff experience last season and have a budding superstar in Paul George.

We will also see how Danny Granger does coming off the bench but depth was in issue with last year's team and with Granger their bench becomes a whole lot stronger.

On that point, I like this Pacer team so much they were my preseason pick to win the championship.

Along those lines, there are also many reasons I think this Net team can also compete this season.

For starters, they have all the complementary parts to be a great team:

Joe Johnson can be inconsistent but can definitely still get you some buckets in bunches.

Brook Lopez is a legitimate seven footer who can bang and is a huge deterrent on the defensive end.

KG is one of the greatest power forwards of all time who put up great numbers last season and with Lopez's presence he can actually play his natural position.

Finally, with Paul Pierce, you have a Celtic Hall of Famer who also had really solid numbers last season (18.6 points, over six rebounds and just under five five assists) who can spread the floor along with Joe Johnson.

And, come crunch time, as every Celtic fan knows, he's one of the best closers to ever play the game.

The Nets also have an amazing bench:

Andray Blatche averaged 10 points and five boards in 19 minutes a game last season. That's a very impressive per minute production and his abilities will help lessen the minutes for KG.

Speaking of rebounding, Reggie Evans is an absolute machine averaging eight per game in 2012-2013 in only sixteen minutes per. More good news for the regular season minutes of Garnett.

Andrei Kirilenko still has some good basketball in him shooting over 50 percent from the floor and averaging over 12 points a game last season with The T-Wolves (bad news is he only played in 64 games).

Shaun Livingston is a very high IQ back up point guard for D-Will if he can stay healthy.

Finally, I know Jason Terry was somewhat of a disappointment in Boston last season, but he still shot the three ball at a very respectable 37 percent rate for The Celts and will help with keeping Paul Pierce's minutes down.

Now, with all these positives for The Nets the one biggest question for me is Jason Kidd as Head Coach. He knows the NBA, but as anyone who has ever done it will tell you, going from playing the game to drawing up Xs and Os on erasable white boards is a completely different animal.

Even with the coaching question mark, all the above mentioned positives point to a very complete and competitive Brooklyn Nets basketball team.

By contrast, The Heat have gotten by more on pure talent and LeBron being clutch rather than being a traditionally well put together basketball team like The Spurs.

Speaking of The Heat, the reason I don't think they will three-peat is The Pacers are still young and will be better and I think Miami will take a slight step back.

I also obviously think Brooklyn will be a formidable challenge for LeBron and company.

A couple of big factors for Miami will be Dwyane Wade's knees, Greg Oden's production and whether Michael Beasley can save his NBA career and be productive or whether he just fades into oblivion.

With regards to tonight's game, it should be a good one considering it's Brooklyn's home opener and the subplot that The Nets have lost 13 straight to The Heat including nine straight to Heat teams with LeBron on the roster.

Another intriguing storyline is both teams lost their last game. The Nets went down in their season opener at Cleveland and The Heat lost to the Sixers behind a spectacular performance by 76er rookie point guard Michael Carter-Williams out of Syracuse in Philly on Wednesday.

My prediction? Even though Brooklyn's playing at home they still are a team that is learning to play together.

So, I have The Heat in a very close game.

However, come playoff time, I definitely would not rule this Brooklyn Nets team out.