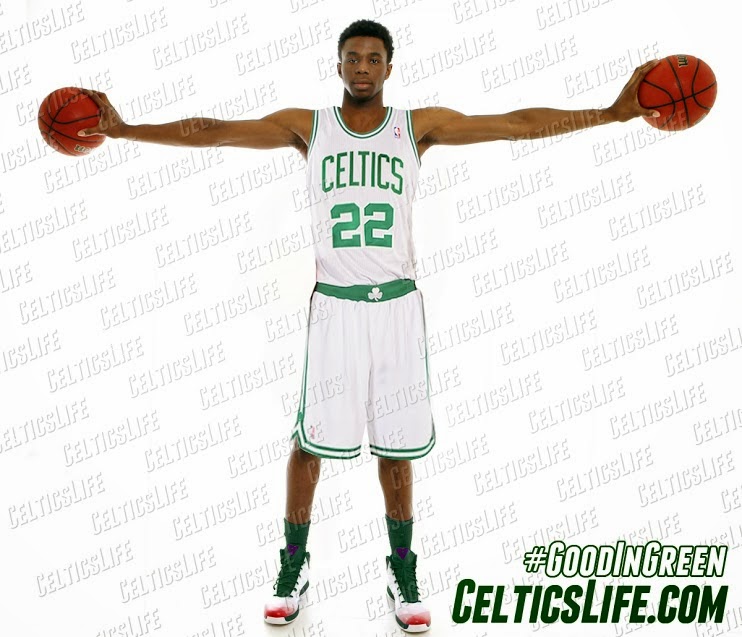 If your excitement for the Celtics home opener is a little more lukewarm tonight than in previous seasons when players like Rajon Rondo, Ray Allen, Paul Pierce, KG, Shaq, and Perk were on the floor sporting the hometown jersey, just remember that this year's "bridge year" is just a temporary setback. We still have some nice young pieces and Rondo will be back at some point this season. Looking for another star to pair next to Rajon? Well there will be a bunch of them in next June's draft.

Thought we'd wet your appetite with a pic (courtesy of our man EK) of the biggest fish, Andrew Wiggins. Of course he couldn't wear his #22 as it's retired for Ed Macauley (Resisting the urge to go on a tangent complaining that the Celtics need to figure out another way to honor players, owners, coaches and GM's then retiring every number), but there still a few double digit numbers available for the player touted as the best prospect since LeBron James.

So what do you think? Does Wiggins look good in green?

Related: Danny Ainge says he's not the GM who admitted to tanking
NBA GM admits his team is actively trying to lose games this season
Andrew Wiggins thinks comparisons to LeBron and KD unfair
Andrew Wiggins worth $140-180 mil to Nike?
Why making a run at the playoffs is the worst thing that could happen for the Boston Celtics
Videos: Andrew Wiggins and Jabari Parker Highlights