What the Hell Happened to...Bob Nordmann?

Back in full force is WTHHT with a special Thanksgiving edition interview!  This time-around, we remember the segment's second former St Louis University Billiken (after Rich Niemann).  Also for the second time in our 4 year+ history history (after Erick Strickland) we hear directly from the man himself, Bob "Bevo" Nordmann, who was kind enough to take some time to answer some questions.

To give you a bit of history: Bob Nordmann was one of the pioneers of basketball specifically at the center position.  He was one of the first true pivots to play the game, a legit 6'10 center who played inside and stayed inside (long before the day of the coveted "stretch big-men" that litter today's NBA).

Without further ado, the exclusive Celticslife interview with Bob:

CelticsLife:  After a standout high school career at St Louis University HS, you went on and attended St Louis University.  At SLU you were named to the All Missouri Valley Conference as a junior.  You were also college teammates with Bob Ferry.  Tell us about your college experience.  What kind of a relationship did you have with Bob?

Bob Nordmann:  I owe a lot to Bob Ferry.  In my sophomore year (Bob Ferry's senior year) he beat me 'like a drum' every day in practice.  We were never real close friends but would 'run into each' other periodically over the years (when I was coaching at MSU and he was a GM with Baltimore).

CL: You were drafted by the Royals in 1961 with the 25th pick in the draft.  The NBA draft was much different then compared to today.  How did you hear the news?

BN: I simply got a telephone call from the Royals GM (Pepper Wilson).


CL: You only had one season playing for the Royals before you were sold to St Louis.  During that year you appeared in 2 playoff games.  Can you explain that season to us, in particular, the intensity of the playoffs when you matched up vs the Pistons?

BN: I really don't remember too much other than best of 3 playoff where we lost the first 2 game and the season ended very abruptly.  I think we got a couple of hundred dollars for the playoffs.


CL: That rookie season you were teammates of Oscar Robertson, Jack Tyman and former Celtic Wayne Embry.  Did you have any relationship with any of them?

BN:  We were teammates but we didn't hang out together much.  They were older.  I usually hung out with the other rookies and roomed together in Cincy with Adrian Smith (Kentucky) who was also a rookie.

CL:  In going back to St Louis, were you excited heading home?
BN:Yes, St Louis was my home and all my family lived there.

CL: You appeared in 27 games for the Hawks before signing on with the Knicks as a free agent in January of 1963.  Normally free agency period is during the offseason, how did you wind up one in January?  And why did you decide to head to the Knicks?
BN: As I recall the old ABA League was folding and NBA teams were looking into their draft picks who opted for ABA and I was 'dropped' by the Hawks and out of a job.  I contacted the Knicks who had lost Paul Hogue (Cincinnati) who had an appendectomy. 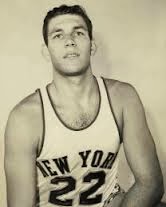 CL: You then lasted 2 seasons with the Knicks before heading back to St Louis.  When did the Celtics contact you?

BN: The Celtics contacted me via Ed Macauley who had been in Boston for Walter Brown's funeral (Summer 1964).  I then was asked to contact Red Auerbach.


CL: Could you tell us about your interactions with Red Auerbach?  What kind of relationship did you have with him?
BN: Red Auerbach was a great friend of my college coach, John Benington.  Every time the Celtics were in town they would play handball together.

Red Auerbach was a great coach who figured out it was all about the players.  Too many coaches want to impress you with their ability to 'diagram plays', etc.  Red's approach to the game was very simple:  find good people who were unselfish athletes who had a passion for winning.  It didn't matter what offense or defense they ran, it was going to work.


CL: You played in 3 games for the Celtics.  What was your experience like?
BN:I had a front row seat to watch the best basketball player (Bill Russell) and the best 'sports' team ever.  What's not to like.

CL: That appears to be your last playing experience in the NBA.  Did you play anywhere else after that?  If not, why did you decide to retire from basketball at age 25?


CL: You had an appearance in "Wish You Were Here" a municipal opera musical in St Louis along with Bob Ferry and many members of the St Louis Hawks.  Can you tell us about that experience?  How did you manage that?

BN: It was a blast.  We would arrive after the show had started and just run on stage and play basketball for about 5-7 minutes, as I recall.  And then go home only to return the next night.  There wasn't much organization.  Just a simple pick up basketball game.


CL: Where does the nickname "Bevo" come from?
BN: I got the name in high school from the football coach.  Look up 'Clarence Bevo Francis' inWikipedia.  SI also did an article on him about 7-8 years ago, I think?


CL: A fun fact to know and tell about you: you were one of only two NBA players in history towear #61 (along with Dave Piontek who also did so for the Royals).  Tell us the inspiration behind that?BN: I didn't know that.  I just took the number they assigned to me.  Didn't have much of a choice in those days . . . 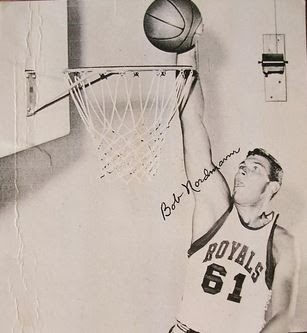 CL: You served as an assistant coach at Michigan State and St Louis University.  At MSU I believe you also acted as the freshmen coach around 1965.  How many years did you serve as assistant coach for the varsity team at both schools?
BN: I was Freshman Coach from 1965-1968.  I was promoted to Assistant Coach when John Benington died suddenly of a heart attack (September 1969).  So I spent 5 years at MSU and 4 years at SLU working with the Varsity.
CL: While at MSU did you have the chance to coach Pete Gent?  I believe he played there around the time you were there.  He later went on to play for the Dallas Cowboys and wrote the book “North Dallas 40.”  If so what kind of relationship did you have with him?
BN: Pete Gent had graduated by the time I got to MSU.  I did meet him a few times over the years but he wasn't very 'connected' to MSU after his football days.


CL: What did you do after retiring from coaching?
BN: I went back to grad school, studying Computer Science.  I worked in the IT field till retirement in 2001.

CL: Looking back on it, who was the most difficult player for you to match-up with?

BN: They were all difficult.

CL: You got to play with Oscar Robertson, Bill Russell, John Havlicek, Richie Guerin, Sam Jones, Tom Heinsohn, Bob Petit, and Lenny Wilkens.  Who was the best player you played with?

BN: I define 'best' a little different than most people.  To me it's all about the 'winning', the 'championships'.  Therefore the greatest player to me is Bill Russell.  He won at every level (college, NBA and Olympics).  All great players have/had the ability to make their teammates better.  And the best players learn eventually that this is all that really matters.  After all Jordan didn't achieve 'greatness' until he started winning championships.  But the really great ones do 'get there'.

CL: For our NBA fans I was hoping you could expound on whether you had a relationship with former Celtic great Ed Macauley?

BN: I attended a basketball camp run by Ed Macauley in the summer of 1956.  Over the years I moved up the ladder from camper to camp counselor to camp instructor and had a very long relationship with Ed.  And Ed was a major player in the trade between the Hawks-Celtics where Russell went to Boston.


CL: Do you still watch the league today?  If so, what are your thoughts?  Could guys today compete with the stars from yesteryear or have fundamentals been lost and over expansion diluted today's product?

BN: I don't watch a lot of regular season games in any pro sport but I don't miss many playoff games in the NBA, MLB or the NFL. I love watching great athletes and teams compete when there is a lot on the line.

BN: This has been a fun exercise for me.  Brings back a lot of memories . . .  Thanks for the opportunity.


Celticslife sincerely thanks Bob for the opportunity to answer some questions during his time in Boston and in the NBA.  It's not every day we get a former Celtic to chime in on the site, let alone one who had the opportunity to rub elbows with some pretty spectacular players.  Celtics nation only wishes Bob played longer for the Celtics and we wish him the best of luck in any future endeavors.