Eye on the draft: The debuts of Andrew Wiggins, Jabari Parker and Julius Randle 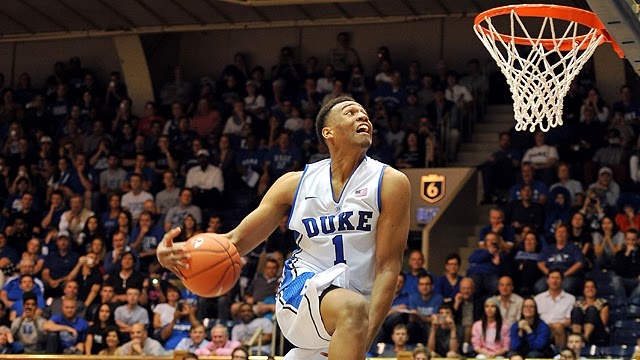 Well the Boston Celtics climbed to 2-4 Friday in Orlando, but if you've been reading you know I feel the Celtics are on their way to a string of losses. Tonight was opening night for the college game, it's never too early to monitor potential picks.

The "big three" of the 2014 NBA Draft all made their debuts Friday. Kansas' Andrew Wiggins, Kentucky's Julius Randle and Duke's Jabari Parker all project as stars at the next level. Here's how they did in their first games at the NCAA level:

Andrew Wiggins: Wiggins at the moment is thought of as the clear cut number one pick in the draft. Although I would have no problem with him ending up in green, I think his draft stock may change by season's end. Wiggins had by far the most modest night of the three, in 35 minutes he tallied 16 points, three rebounds, two assists and three steals against Louisiana-Monroe. Andrew shot 5-9 including 2-4 from deep. Not a bad debut at all, but there is room for a lot of improvement. Wiggins will certainly be a star, but issues surrounding his drive may be what holds him back from the top pick.

Julius Randle: Randle was an absolute beast tonight, putting up eye popping numbers against UNC-Asheville. Julius rolled out a stat line of 23 points to go with 15 boards in only 26 minutes. Randle shot 6-12 from the field, but drew a ton of contact and went 11-13 from the free throw line. Randle really is a can't miss player at the next level and he showed why tonight. He doesn't get nearly the press that Wiggins does… keep an eye on him.

Jabari Parker: I saved Jabari for last for two reasons; first I was able to watch the Duke game tonight (flipping between the Celts), and second he is just my favorite. Don't ask me why, but he just has "it". He can score from everywhere which has drawn him comparisons to both Paul Pierce and Carmelo Anthony. He can pass the ball, he hits the glass and he plays defense. Parker was fantastic, in a mere 23 minutes of playing time he controlled the entire game against Davidson (a stiffer opponent than Wiggins/Randle faced). Parker went for 22 points on 8-10 shooting and a perfect 3-3 from downtown tacking on six rebounds, two assists and a block. I love this kid and pray to see him in green next season.

Tuesday night will be a must watch double header of college hoops on ESPN. #1 Kentucky will face #2 Michigan State followed by Wiggins and Parker head-to-head in #4 Duke Vs. #5 Kansas. Don't miss this!