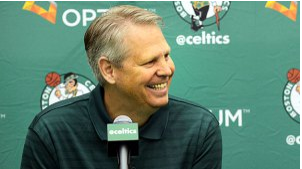 Danny Ainge may have just had his drop the mic moment. Well- the most recent mic drop in a series of mic droppings.

Danny joined 98.5 The Sports Hub’s Toucher & Rich on Thursday and not only addressed the swirling rumors, but managed to superkick those spreading said rumors into oblivion.

“I don’t like to address rumors, but there is just not a lot of integrity in the media,” said Ainge. “I don’t believe there is a source close to the team that said that. I believe there is a lot of things that are made up today in the desperate world of competition in the media. I don’t want to throw every media person under the bus; there are some great people in the media with a great deal of integrity. But there is so much garbage, and someone close to the Celtics would never say that.

“Those kind of rumors can be damaging and they start a lot of talk that is unnecessary and wastes a lot of time,” said Ainge. “There are so many people out there I don’t even know who half these guys are.”

As the president of basketball operations, Danny has to not only defend his team, what he and his staff are trying to do, and set expectations for what his team can achieve. This is the kind of response that in my opinion says, “leave me alone – I’m working on something.” Ainge weighed in on a number of topics. To hear the full interview, click here. To check out the highlights, keep reading:

“Sully is really developing. You see it in his comfort and confidence level,” said Ainge. “He’s really improved his outside shooting and is improving it even more by stretching it to the three-point line. We don’t want him to be away from the basket much, but the ability to be a three-point shooter, in addition to his passing and inside play and rebound, it will make his play more complete."

“We’re very happy with his development. We still don’t think he’s in as great a shape as he could be, but he’s getting there,” Ainge added. “He’s working hard.”

“I think they’ll be fine; they haven’t had their team together yet,” he said. “I was watching them the other night and they had five of their six best players not playing. Brook Lopez and Deron Williams, those two are supposed to be the two guys really carrying them along with Joe Johnson. KG and Paul didn’t go to (Brooklyn) carry the team; they went there to be supplementary and role players with playoff experience. If have to be their best players, it will be a tough go in Brooklyn.”

Ainge again stated he has no interest in trading point guard Rajon Rondo, and said he’s received less phone calls about a potential trade (involving any of his players) than last season.