Starting 5 in trial period for Stevens 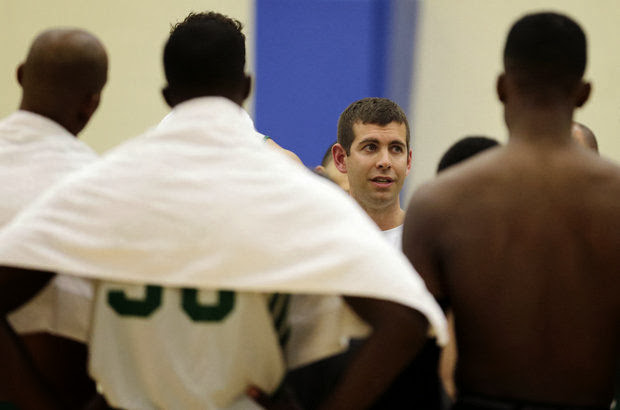 I think when it comes to the Celtics starting five, only Rondo and Green are locks. With Rondo sidelined for now, that opens up the starting unit for now.


Scribes in attendance were treated to one fancy Jordan Crawford scoop shot; a nice high-low assist from Kelly Olynyk to Jared Sullinger; Vitor Faverani launching a 3-pointer from the left wing (he missed); and one team, down three points in a 10-second scrimmage, finding Kris Humphries flaring to the right wing. His shot bounded off the rim, either forever dooming his team to misery … or bringing a quicker end to practice, which Stevens said went very well.

After an early-morning walkthrough lasted about 40 minutes, the Celtics participated in another three-hour session beginning at 2:30 p.m.

"This afternoon was good, the energy was fantastic," Stevens said at the team's Waltham facility. "One of the things you take is you learn more about your team each day you are with them in practice, and how they respond to off days. You coach a lot of teams that, after an off day, they’re not very good in practice. This would be a sign that this wouldn’t be the case with this team. They were very in-tune, they were really getting after it. It was a good day."

"I rate it by two things: Did we make progress every day, and then how were our attitudes?" he said. "And both of them have been good. We've made progress and the attitudes have been great."

For the scrimmaging reporters saw, Avery Bradley and Jeff Green worked on separate units, a sign that little could be gleaned about any potential starting lineup. In fact, Stevens, suggesting he has tinkered with lineups in practice to get a better understanding of how players will mesh, said he hasn’t yet settled on a first unit. Despite the preseason opener against Toronto coming Monday night, he might not do so soon.

"I think as far as playing time, starters, all of that stuff, this will be trial week," said the coach, referring to a week with four preseason games. "That will not be determined by Monday night. And most likely we’ll flip that around throughout the week and really use it as continuing to try to get better."

I hope all of you have a paper bag near by, it seemed like Crawford logged a lot of time with the potential starting lineup yesterday. It seems that Crawford is working hard for the starting job, and if he keeps it up. He'll be starting opening night, and maybe trying him out is for the best.Even if he starts, it doesn't mean he'll log more minutes than Lee and Brooks, or even Bogans. With the first preseason game set for Monday night. Will get to see the new look Celtics for the first time, only without Rondo. Will find out more after the first game.