Can Green and Wallace be a formidable one-two punch? 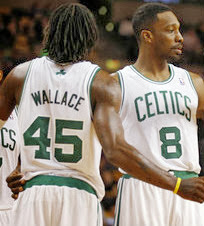 So far it's been a rough preseason. The Celtics are just 1-6 in preseason so far and they've being outscored by an average of 7 points a game, and even then, that number could've been much worse but it was boosted by the Celtics one and only 30-point victory over the Knicks where players like Carmelo Anthony, Metta World Peace, and Raymond Felton, didn't see playing time. Despite the overall team losses, there have been bright spots here and there. For example, Vitor Faverani, Kelly Olynyk, and Phil Pressey have been pleasant surprises.

With the losses Celtics have been accumulated thus far, there is some solace in finding positives in every game no matter how small it may be and the latest bright spot has been a Jeff Green/Gerald Wallace combo. In the latest Celtic game against the Timberwolves these two could be seeing some extended minutes on the floor together.

Their ability to impact the game at both ends of the floor was instrumental in Boston remaining within striking distance most of the first three quarters against the Timberwolves.

Green came off the bench to score 12 points while Wallace got the start and led all Celtics with 16 points.

Even more significant than their scoring was the fact that they logged more than 14 minutes of court time together and the Celtics were an impressive plus-9 with them on the court.

The rest of A. Sherrod Blakely's article can be found here.

Even though 14 minutes is a terribly small sample size, the Green/Wallace combo can prove to be a major positive for the Celtics on both ends of the floor. Both Green and Wallace have the ability to play and defend at three positions (shooting guard, small forward, and power foward), this becomes extremely crucial when putting lineups out on the floor, since you can pretty much move Green and/or Wallace one or two positions to fit your needs on the court.

Green and Wallace can put immense pressure on the defense since both players have the ability to attack the rim and get to the free throw line. In addition, both players are dangerous in the open court and have great finishing abilities.

It probably won't all be flowers and daisies though. Despite how good both players are, floor spacing might be a problem. Green was one of the best (if not, the best) 3-pointer shooters on the team last season, but so far he hasn't found his stroke behind the arc in preseason, and even though Wallace isn't known for being a 3-point shooter, he's taking enough threes per game for it to affect the team.

What are your thoughts? Do you think Green and Wallace can be a versatile and important part of the Celtic upcoming regular season?