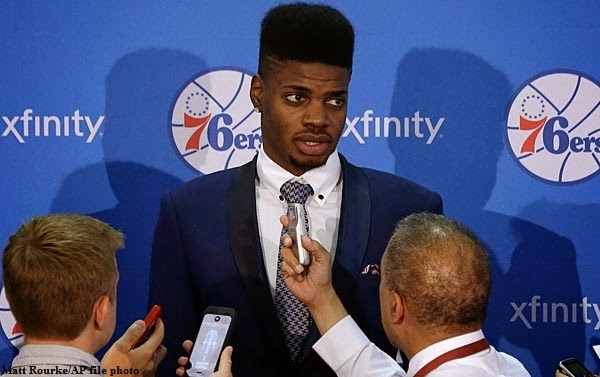 For much of last year Kentucky Wildcat freshman Nerlens Noel was projected to be the #1 pick in the NBA draft.  A gruesome looking ACL tear brought an abrupt end to his season in February, and Noel wound up being taken #6 overall by New Orleans (then traded to Philadelphia for Jrue Holiday).  Noel had surgery to repair his knee in March, which puts his timeline roughly one month behind Rajon Rondo's.

Many Celtics fans and writers are of the opinion that Boston would be best served by Rondo taking as long as possible to return.  If this is something the C's are inclined to let happen, they'll be hard pressed to match the Sixers treatment of their injured rookie.  Philly head coach Brett Brown announced today that they expect to hold Noel out for all of the 2013-2014 season.  Via ESPN's Brian Windhorst, Brown stated "I doubt, everybody doubts that he's going to play this year."

The standard recovery time for ACL tears is usually 9-12 months, which would put Noel ready to go sometime between December and March.  Windhorst also quotes Dr. James Andrews (who performed the surgery) as saying the following back in June:

"We're really happy with his progress. He's several weeks ahead of schedule on his rehab. He's improving on a weekly basis. He has a completely stable knee."


Yes, Noel is considered a project, and probably wouldn't do much to improve the Sixers even if he were to come back mid-season.  But the fact that Brown is willing to say right now that a guy who could be healthy in 6 weeks is likely out for the year is a very telling sign.  Philly is in full on tank mode, and has just set the bar extremely low for the Celtics and anybody else who may try to compete with them.