Be careful what you wish for: Ainge on tanking vs. rebuilding 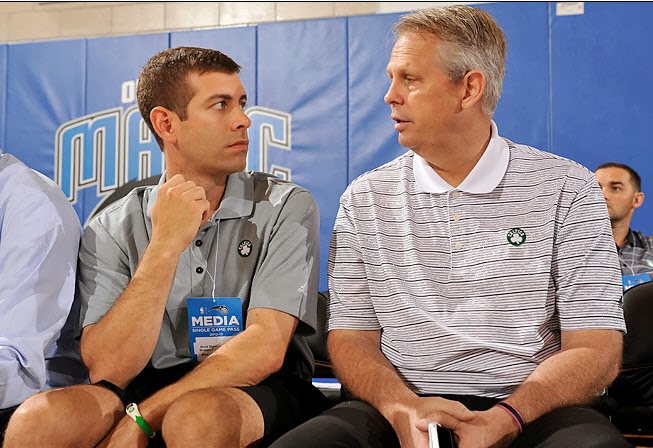 ...I don't think people understand. It's unrealistic to think that there's only one way to win and that's by losing to get better.

While Ian Thompsen's entire Inside the NBA Piece is worth your time to read, that singular quote from Danny Ainge is all you really need to understand the "rebuilding" vs. "tanking" argument. It wasn't too long ago - six years to be exact- that the Celtics were circling a similar problem.

The Celtics were coming off a season where they were the worst team in the NBA. A 24 win team/shell of a dynasty. But it was all going to change because we were going into the lottery and we were going to get the first pick and we were going to draft either Oden or Durant and blah blah blah. None of that happened. Getting the first overall pick in the draft isn't that hard, but getting the first overall pick in a draft that holds a transcendent player is nearly impossible. Danny Ainge knows that and realizes hopin' and wishin' and prayin' is no way to run a franchise.

Love him or hate him, Danny Ainge knows what he's doing. From allowing people to verbally punch themselves out before addressing a topic, to making moves that pay off miles down the road, Ainge is doing everything with the Celtics best interests-as he sees them- at heart.

"As I walk around town, more than anything else there are those that say, 'Hey, don't win too many games,"' said Ainge, the Celtics' president of basketball operations. "There are so many fans that want us to play for the draft." Ainge's measured response is that they should be more careful what they wish for. "That's harder than people recognize," said Ainge of losing as a strategy. "It's a really easy thing to conceptualize, and an easy thing to talk about and philosophize about. But it's a hard thing to live through -- for fans, for coaches, for owners, for sponsors, for our TV partners."

ON THE GUYS WHO ARE ON THIS TEAM RIGHT NOW

"Those guys are all trying to win," Ainge said of Wallace and Green and Rondo. "They don't want to go out there and play for a draft pick. Brad Stevens in his first year as coach -- he's going to give a big pep talk about coming together as a team. How do you fake that? There's not one thing fake about Brad Stevens. I think that's why he'll be able to sell it."

"If all of a sudden Rondo's out for the year and a couple other key guys, and maybe goals change over the course of the year," said Ainge, and then he stopped the dark thoughts there. "But starting the season out," he carried on brightly, "we're starting out full blazes. And see what we can do."

My key takeaway is this- We are not living in a sports movie. We are not battling owners who are trying to sell the team ala Slapshot, Major League, or Semi-Pro. Our GM is Danny Ainge. A person who has won titles as a player and executive for the Boston Celtics. He has an in-depth understanding of not just how things happen in basketball, but why things happen in basketball. We don't have to agree on all the moves he makes; that's our prerogative as fans. However, it is clearer now than it was an hour ago that Danny Ainge is focused on one thing - an 18th Banner... even if it's not going to hang from the rafters this season.