What the Hell Happened to...Johnny McCarthy? 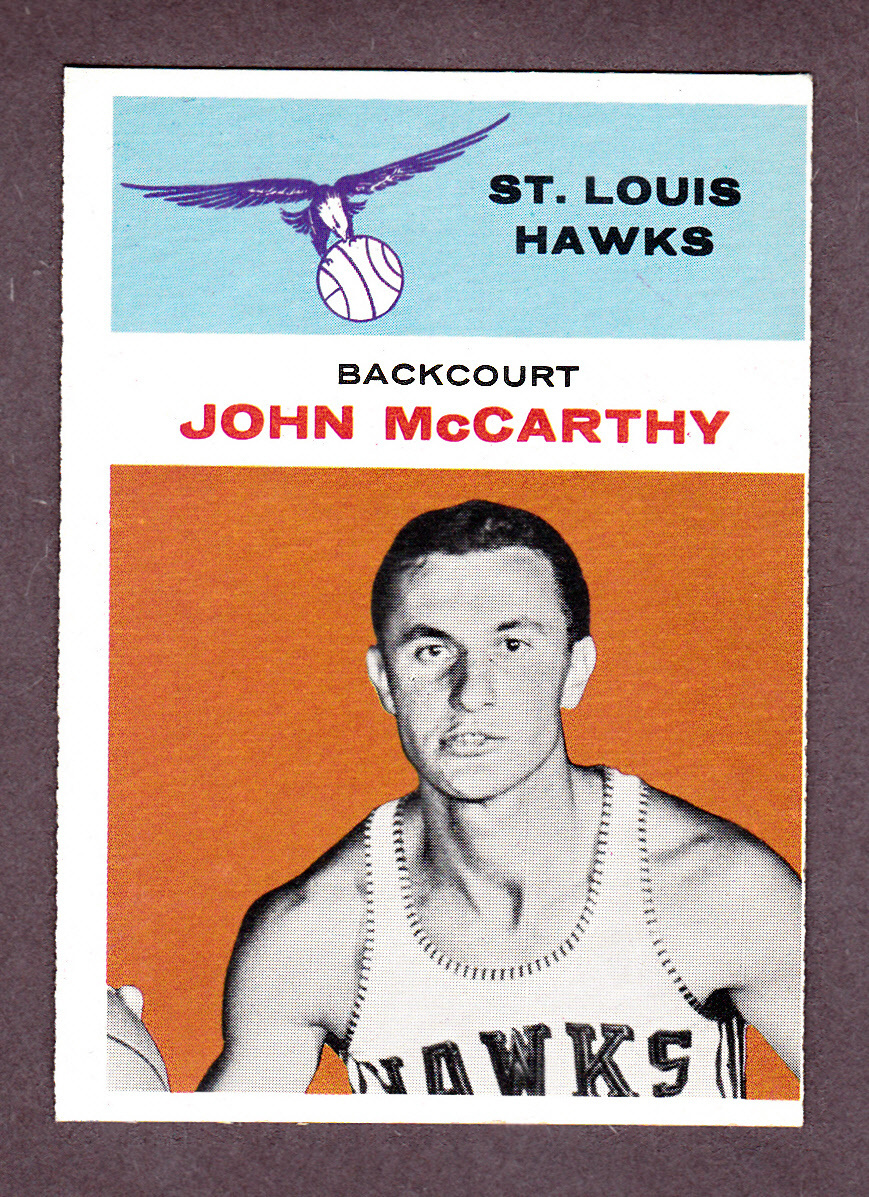 This week in What the Hell Happened to, we remember back to the 60s and the Celtics and their reserve guard, Johnny McCarthy.

After a standout career at Canisius College (in upstate NY) John was drafted by the Rochester Royals in the 1956 draft.   After a rookie season in which he appeared in 72 games averaging 21 minutes a night, John had to miss the 1957-58 season to fulfill his military obligation.  When he returned for the 1959 campaign, the Royals had moved to Cincinnati.  After one more season with them, John was shipped to the St Louis Hawks for Whitey Bell, Win Wilfong and Tom Hemans (is it me or there's a serious lacking of guys named Whitey in today's NBA?  Or guys named Win for that matter too).

For three consecutive seasons, he led his team in assists, including the St. Louis Hawks who fell in the Finals to Boston in 1960 and again in 1961.  But by the ’61 playoffs, more and more of McCarthy’s playing time was being given to Hawks’ rookie point guard and future Hall of Famer, Lenny Wilkens.  A serious leg injury limited Johnny to a mere 15 games for St. Louis in ’61-’62, and he didn't play at all the following year as he moved over to the ABL

Red Auerbach brought McCarthy to Boston for the 1963-64 campaign to replace some of the veteran leadership that had retired with Bob Cousy the previous season. McCarthy appeared in just 28 games while Sam and KC Jones, John Havlicek, and an aging Frank Ramsey logged the majority of minutes.  The Celtics would win that title though in 1964 and Johnny would get a championship ring.

One interesting fact about Johnny?  He shares a record with Magic Johnson and LeBron James as being the only 3 players to obtain a triple double in their playoff debut.  McCarthy had a very Jason Kidd-like 13 points, 11 rebounds and 11 assists against the Minneapolis Lakers on March 16, 1960.

Most people know that guys who played during Johnny's era didn't care particularly much about shooting percentage.  This was at a time where the shots per game taken and rebounds obtained were at absurd heights.  However it didn't stop Johnny from being a particularly awful shooter.  From all accounts he couldn't hit a bull in the ass.  Johnny converted five out of 13 free throws during his one season with the Celtics, numbers that would make anyone not named Garfield Smith cringe.  For his career he shot 62% from the line and 35% from the field.  Not particularly strong for a guard at all.  He was known as a crafty passer though and finished in the top 10 in assists for 2 seasons.

So Johnny McCarthy couldn't shoot, so what?  Well he wasn't particularly successful at his next endeavor in life either, coaching.  After retiring Johnny took turns coaching both the Royals in the NBA in 1972 where he had a disastrous record of 22-59 in one season, filling in for Dolph Schayes who was fired after one game.  After that, he decided to give a shot at coaching back at Canisius in 1974, but more poor results ensued.  He was fired from there in 1977 after a record of 3-22 his final year.  His total record in 3 years at Canisius was a lackluster 28-49.

Despite the poor coaching (and poor shooting during his NBA tenure) Johnny was inducted into the Canisius College Hall of Fame.  I actually wasn't able to find out what the hell John did between 1977 and 2013, which obviously upsets me greatly, but he's definitely retired now.

Today Johnny lives in Orchard Park, NY (at least he gets his haircuts there) which is a nearby suburb of Buffalo, NY which is where Canisius College is located.  He's 79 years old but in great shape and he plays lots of golf and apparently the occasional pickup game at the Y in Orchard Park.  How great would a golfing foursome of Johnny, Red Morrison, Ron Mercer, and Eric Riley be?  They could collectively talk about their feelings as being part of the WTHHT.