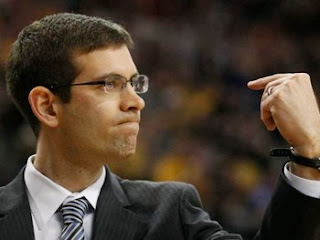 New Boston Celtics Head Coach Brad Stevens - apparently aware of the fact that the team has about 37 power forwards - stated continuously that the team would focus in on versatility, and 'positionless' basketball.
Continuously stressing the team's need to stretch the floor and keep the ball moving.

When pressed for questions on the team's versatility, Stevens seemed to face a lot of questions about Jeff Green and Gerald Wallace's, whose 2013 play really seemed to clearly establish their positions, ability to share the court,

"The best part of the Jeff Greens of the world, the Gerald Wallaces of the world," said Stevens. "Is you can play a lot of different guys around them."

Stevens continued to melt the hearts of basketball nerds and Celtic nation around the globe, explaining that he thought "(the) best team bonding exercise you can have is to be tough defensively."

Ultimately, the on court results will be how we view the success of the young head coach, but he sure has been impressive so far; proving to be as charismatic and intelligent as advertised. Luckily, we're not the only one's noticing - Danny Ainge joked that he was ready to sign Stevens to a 4 year extension when asked how impressed he was with his new Head Coach.

Here's to hoping he gets that. Keep giving hope to the hopeless, young fella.