What the Hell Happened to...Red Morrison? 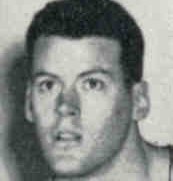 This week in What the Hell Happened To, we remember the last Celtic to wear #15 before Tom Heinsohn, Dwight "Red" Morrison.

Dwight was born in 1932 in Fresno, California and attended Walla Walla High School in Walla Walla, Washington.  After being named All State in basketball, he'd attend the University of Idaho where he was named All Conference as well as Honorable Mention All-American.

He'd be drafted in the second round with the 5th overall pick (#14 overall) in the 1954 draft.  He'd play with the Celtics for two years but took off the 1957 season for pre-med at the University of Washington.  He then returned to the NBA the following season and played for the St Louis Hawks (TB Tangent: how did Red Auerbach not seek compensation for Red?).

Red was listed as a 6'8 forward-center.  Of course you know what that means right?  That he'd totally be a center in today's NBA.  The name Dwight "Red" Morrison to me totally sounds like a bad guy in an old spaghetti western movie.  But apparently this Red was busy fighting actual bad guys.

Red retired from the NBA after 1958.  I was unable to locate his whereabouts from 1958-1963 but on
October 28 of 1963, he entered the FBI as a special agent.  He'd serve in the El Paso, LA and Seattle offices.  He was credited for making hundreds of arrests including some fugitive cases and bank robbery cases.  He would stay with the FBI for 22.5 years, retiring in 1986.

From June 1986 to January 1995, Red worked as a security investigator for Boeing in Seattle.  During that same period from 1990 to 1994, Red worked as the security representative.  After retiring from the FBI, he also became active in the Society for Former Special Agents of the FBI.

Red is alive and well today at age 81 and lives in Bainbridge Island in Washington with his wife Peggy.  Bainbridge Island is a short ferry ride from Seattle.  They have four children: Michael, Jane, Steven and Susan, 17 grandchildren and 7 great grandchildren.  He enjoys going to Arizona during the winter months to get away from the cold.  He's been an avid golfer throughout his life and attends a Presbyterian Church.  His wife Peggy also updated us that Red is an active swimmer and yoga student.

Celticslife thanks Red for his time with the Celtics!