The quest to net redemption: the chronicles of Kris Humphries 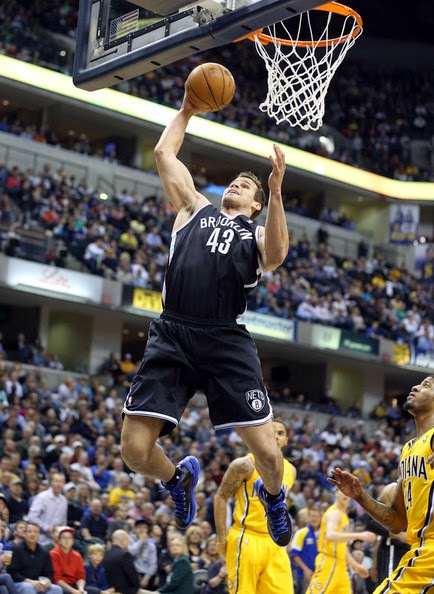 Writing or talking about Kris Humphries as a member of the Boston Celtics still makes some uneasy and yet it seems unavoidable to study the basketball biography of the big man coming from Minnesota.

Yes, we are going to talk about basketball and Humphries. I am not interested by any of the media exposure the guy has got himself into in the recent years. Heck, you could even get to justify that when you play for small markets in Utah and Toronto and you are suddenly a member of the mighty New Jersey Nets after a brief stint in Dallas.

At first, Humphries found fame through sports. As a child he swam his way into stardom by breaking the US national record for the 50-meter freestyle for 10 and under boys. It was sports, and only everything related to it that helped build Kris Humphries the player. His father was a football player at the University of Minnesota, and Kris tried with football, swimming and later basketball to follow his dreams to become a professional athlete. Soon he became excellent at basketball too. Named a 2003 McDonald's All-American and part of the Second Team All-USA by USA Today, he became Minnesota Mr. Basketball and state player of the year that season, averaging 25.7 points, 11.4 rebounds and 5.0 assists per game. 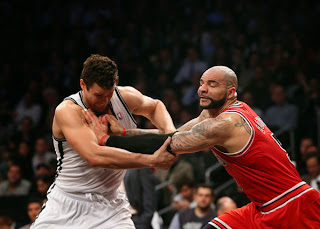 As you can see, Kris had a promising future born from hours of practice and hard work that continued through college at Minnesota University where he averaged 22 points and 10 rebounds per game in his only year in the university.

It was clear that Humphries had a future in the NBA and he was selected with the 14th pick in the 2004 NBA draft by the Utah Jazz. Yes, the Celtics got Al Jefferson with the 15th and the Hawks got Josh Smith with the 17th, so I see where you are going. But also keep in mind that players like Rafael Araujo (Toronto, 8th), Luke Jackson (Cleveland, 10th) and old friend Robert Swift (Seattle, 12th) were all selected before him.

In any case, Humphries career started probably with much less success and celebrity in his first years in the league. He never really got to play consistently in Utah, Toronto and Dallas. Everything changed in every single way after he was traded with Shawne Williams to the Nets for Eduardo Najera in January 2010. It was in New Jersey some months later where he found international fame outside from the basketball courts, but also within the realms of the basketball court he found his niche in the league. 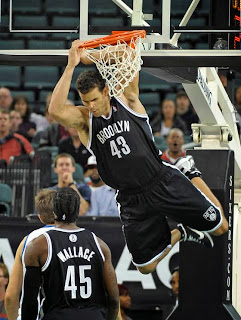 I will throw you some numbers there: Humphries averaged 9.5 points and 8.5 in his almost four seasons with the Nets. His best season came two years ago in which he averaged 14 points and 11 rebounds per game...quite impressive, right? It was during his time with the Nets that Humphries also got the attention from Celtics fans. I am sure you remember that game in which he gave fits to Kevin Garnett while the latter was fighting to come back in shape after his serious knee injury. Everybody thought that KG was losing a step and a guy like Kris Humphries was exposing it.

Of course Humphries got our full Celtics hate this year when he fought KG and later Rondo at the beginning of the season. The full hate process was complete at that very precise moment. We hated Humphries because of what he did to KG and because of the nature of his off court life.

What I want you to realize is that all that fame means very little on the basketball court. The lives of these professional athletes shouldn't translate much into our fanhood for the sport of basketball. If that was the case there wouldn't be fans of Kobe Bryant, Jason Kidd or Carmelo Anthony to name some examples.
Why are we so tough on Kris Humphries then? Because he is not a superstar and the others are? I am sure some of the fans who rip him would have liked to have some of the experiences he had. Those years for the Nets also got him a two year, $24 million contract that in fact meant a way for the Nets to acquire Garnett and Pierce from us. Thanks to that contract we may have a chance to watch Kris play for the Celtics this year. Unless Ainge receives a very good player or another expiring contract in return, don't expect Humphries to play for another team next year. The Celtics should keep Hump because of the salary he will free up for the team next summer and because he fills a glaring need for us: rebounding and strength in the paint.

So, accept the facts Celtics fans: Kris Humphries is a Boston Celtic too. He will easily average 8 points and 8 rebounds for us next season in around 22 minutes per game. He will wear the green with the same pride as the rest of the squad. He will rebound, hustle and fight for the loose ball the best way he can.

As he has always done in the basketball court.

Accept the challenge: welcome Kris Humphries to the Boston Celtics.

His quest for Celtics redemption has started. Are you ready to give him a chance?