After the Celtics' recent elimination in the playoffs, where there's still a glaring weakness at having enough size and the ability to rebound, what if I were to tell you that once upon a time, not too long ago, there was a 7'3 center that patrolled the paint for Boston. What if I told you that guy still played professionally today, and was putting up big numbers for the Rain or Shine Elasto Painters of the Philippine Basketball Association, would it upset you?

Well it shouldn't because even though Bruno Sundov played for the Celtics, along with Paul Pierce, he never made a bit of a difference.

He was 7'3 and was shooting 3 pointers. I remember the Buffoon being big on the guy, talking about how he once put on a show shooting 3s during a summer league scrimmage in Boston and how Paul and Antoine were impressed with the big man's skills.


"The team strategy and how they play fits more into my game," said Sundov. "[Coach Jim] O'Brien's basketball theory is you have got to get a big man who can score, who can shoot. That's what I can do. They want me to go outside, and that's a perfect fit into my game."


Although Bruno Sundov is Crotian, he played his high school basketball right here in the states in Massachusetts at the Winchendon School in Winchendon, MA.  I recently stumbled upon a Bruno Sundov scouting report and seriously couldn't agree much more, based on seeing him during his time in Boston and with the Knicks:


I gotta admit I was bummed when they signed Sundov because I knew the Buffoon somehow thought he'd bring what Rodney Rogers brought to the table.  BIG BUFFOON MISTAKE.  Rogers wound up leaving and signing with the Nets (Btw astute trade Buffoon, you get Rogers and Tony Delk for Joe Johnson, who is still a big-time player at the writing of this, 11 years later, and you let Rogers walk after the year.  How much did Phoenix hoodwink him?  And to think they really wanted Kedrick Brown...)

1 season, 26 games, 56 shots (16 of which were 3 pointers) and 25% FG shooting from the field would be the career lines for Bruno in Boston.  After 1 year with the Celtics, he was traded to the Cavs for a second round draft pick (that would turn out to be Ryan Gomes) and Jumaine Jones.

His NBA stint would conclude with 4 games with the Cavs and 22 for the Knicks over the final two seasons of his career. 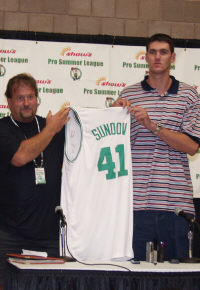 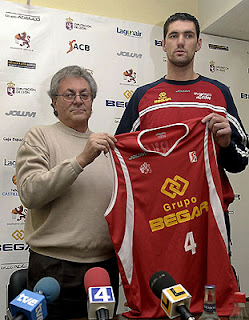 As I mentioned previously, Bruno is still playing today for the Rain or Shine Elasto Painters of the Philippine Basketball Association and when I last checked, seemed to be putting up some good numbers.  However not everything was always great.  Here's a quote from Rain or Shine's Head Coach Yeng Guiao from April this year following a championship contest:

“It’s the worst game for Bruno and it had to come when it was our biggest game,” ROS head coach Yeng Guiao said after his squad became the ninth team with a twice-to-beat advantage to get booted out since the incentive was institutionalized in the 1996 Governors’ Cup.

“Had our import grabbed 10 rebounds instead of six, it would’ve made the difference,” Guiao added.


While he would've added size, I'm not quite sure Bruno would've helped the Celtics' rebounding woes this past season.  His NBA career total rebound percentage was 11.5% which was the identical percent of his one season in Boston.  For the record, Brandon Bass' was 11.2% this past season.
For a list of all the "What the Hell Happened To" Series please click here.