Scal thinks the Celtics should stay the course 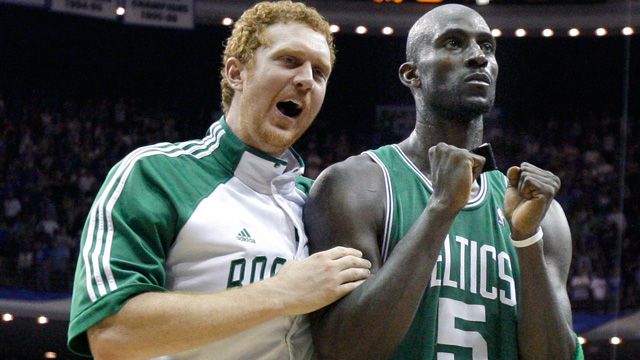 Brian Scalabrine via Toucher and Rich


“Everyone is talking about blowing the team up. I think they’re in a good position at least for the next two years,” said Scalabrine. “Even if Garnett retired and Paul went somewhere else, they still wouldn’t have cap space to make major moves. They could make trades, but I’m talking about what they have now. Why not keep these guys and play this thing out for the next two years?”

“Kevin Garnett was an All Star this year; don’t think of him as the Garnett of five years ago but he’s a very serviceable big. Garnett makes $13 million; (Golden State’s) Andris Biedrins doesn’t even get off the bench and makes ($9) million. There are a lot of guys out there that KG is 10-times, 100-times better than at his age,” said Scal. “Garnett at $13 million is worth it.”

“Pierce, even if you don’t want to pick up his option, it doesn’t hurt you long term. Everyone says he was exposed in the playoffs, but I think that’s because Rondo wasn’t out there and he had to do too much,” he said. “I think they keep these guys together and go to the draft and try to find a big that is strong that can bang and rebound, and I think that can help them a lot.”

You're going to get a ton of opinions on whether the Celtics should move on from the Pierce/KG era or give it another go. Both camps have strong arguments. Also it depends on what a particular fan prefers. There's no magic trade out there where you trade KG and Pierce and get better in the short term. If you are moving on from Pierce/KG it's because you've come to the conclusion that taking a step back is necessary in order to be able to compete for another championship sooner rather than later. If you're holding on to them it's either for sentimental reasons (which is fine) or it's because you'd rather see a team for another year that can possibly make the second round than a team that will be in the lottery.

This June marks the 5 year anniversary of the Celtics last championship. Back in the day it would be unacceptable to go five years without a championship, yet now we are staring at a team that just went 5 years without one and we're not sure if there is a plan in place to compete for another within the next 5 years. Unfortunately trading Pierce and KG won't do much to make us a contender, so Scal is right there. There would be no cap space and even if there was the two elite free agents, Dwight Howard and Chris Paul, are not interested in considering Boston. The plus for trading Pierce and KG would be to acquire a few extra assets, so if another 2007 KG-like trade became available we could be players.

Scal makes some valid points, which you can't simply just dismiss because he's emotionally invested in Pierce and KG. Boston fans and media are more attached to these guys and are going to be more likely to say Ainge should hold on to them. The national media almost universally thinks the team needs to finally be broken up. Most likely the national media should have a better grasp on this, since they aren't biased to the team. But one thing the national media hasn't presented is a recipe for becoming a contender if we do blow it up. It's extremely easy to just say trade player A and trade player B. Presenting a realistic scenario where star A and star B join the team is much harder.