Pierce could sit against the Timberwolves 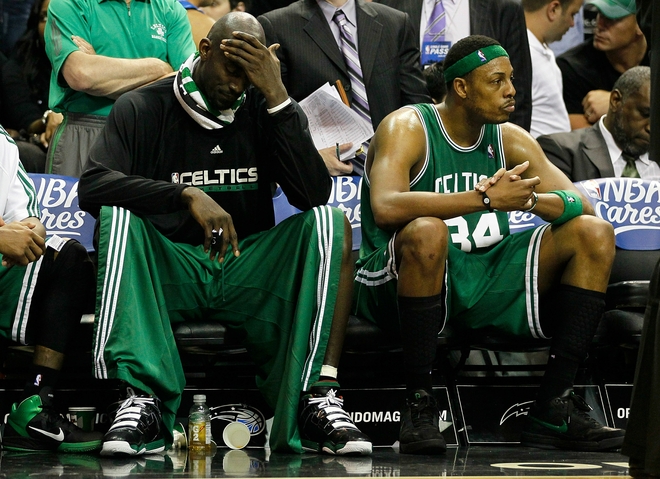 The already battered Celtics could be without their captain against Minnesota Monday night.

According to ESPN's Chris Forsberg, Paul Pierce turned his ankle in the first quarter which forced him to sit out the final 13 minutes of the Celtics' 108-89 loss to the Knicks Sunday. Pierce was seen on the bench with an ice pack taped to his right ankle. From Forsberg's piece:

It’s just a little sore," Pierce said. "I turned it in the first quarter. It shouldn’t be a problem."

Informed that Rivers suggested he'll get a night off, Pierce responded, "A possibility. We’ll talk tonight."

After noting that Pierce had said he was fine, Rivers said, "We're going to give him a rest, we’re going to sit him games, for sure. Very soon."

Pressed on if that meant Monday's game, Rivers answered, "Probably."

Boston is already playing without Kevin Garnett for the next week or two, at least, as he recovers from ankle inflammation and Courtney Lee is nursing an ankle injury of his own. With Rajon Rondo and Jared Sullinger already done for the year, the squad the Celtics start Monday could be Avery Bradley, Jordan Crawford, Jeff Green, Brandon Bass and Chris Wilcox. Sure, Jeff Green has been playing better and Bradley's defense, while in decline recently, is still very good, but that starting five is nothing to get excited about.

The Celtics aren't in any immediate danger of falling to the eighth-seed in the playoffs, as Milwaukee continues to play below .500 basketball, but the team is certainly in no position to be giving games away.

Boston has nine games left in the season. The next four are against sub-par teams with Minnesota, Detroit, Cleveland and Washington. The Celtics need to win at least three of those games before they face off against Miami, Brooklyn and Indiana if they want to stay in the "sweet spot" of the sixth- or seventh-seed to keep Miami as far into the future as possible.

All these injuries don't help their cause. Here's hoping Green continues to flourish in his starting role (22.1 ppg and 6 rpg in eight starts this year) or hoping the Bucks keep up their "stellar" play so the Celtics can rest up before the second season.