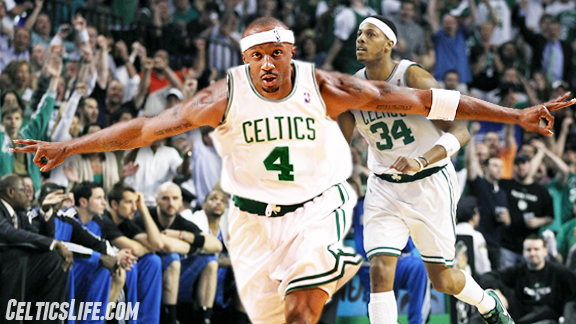 Jason Terry is not about to let his subpar night against the Heat (3-9 shooting), or his subpar season (10 points per game) defuse his trash talk game. Chris Forsberg of ESPN Boston had this quote from Terry about tomorrow night's game with the 20-59 Magic.

Jason Terry dubs Orlando game a must win. Asked why, he notes, “I don’t want to give them any fuel, but they’re terrible.”
— Chris Forsberg (@ESPNForsberg) April 13, 2013

Not going to lie, it made me chuckle. Kind of like when people say "no offense" and then say something very offensive.

"I don't want to give them any fuel" --- ok makes sense, let sleeping dogs (or in this case a sleeping terrible basketball team) lie.

But seriously, Terry is dead wrong. The next important game the Celtics play will be next weekend when they open up the playoffs. Get Pierce and Garnett 1-2 more games to shake off the rust, and make sure Green's elbow is ok. Then get ready for all out war with New York.

Get healthy Celtics. And JET, you've got one week to get comfortable and knock down some big shots. As of right now that $5 million salary is looking like a mistake, it would be nice of you to make it look a little better starting in Game 1 vs. the Knicks.