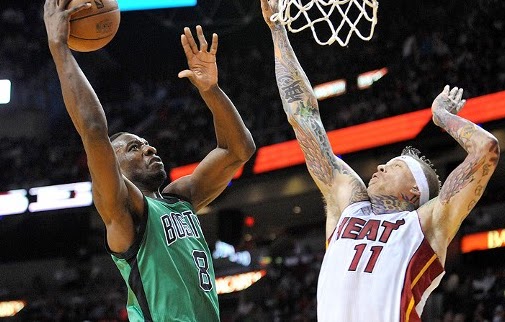 The Boston Celtics lost to the defending-champion Heat Friday night to give up the season series 3 to 1.

Despite some strong individual performances, The Celtics struggled as a team, particularly on the defensive end. Jeff Green scored 25 points on 10-17 shooting with 8 rebounds and several terrific dunks, Brandon Bass had 14 points and 8 rebounds, and Jordan Crawford went for 20 points.

LeBron James and Chris Bosh were solid but The Heat's 3-point specialists , Ray Allen and Rashard Lewis, combined for 33 points on 6 3-pointers (Chalmers and Cole added 5 more triples). Kevin Garnett sat out to rest his ailing ankle, leaving a huge hole in the middle, which Spoelstra's Heat took advantage of. Paul Pierce also sat with a sore ankle, making Jason Terry the only veteran on the floor.

The Jet never got off the runway, shooting 3-9 with 4 costly turnovers. Without KG or The Truth, The Celtics really needed a bench spark, but Terry, Shavlik Randolph, Chris Wilcox, and Terrence Williams all put up lackluster performances.

All in all, the result was not very surprising. Playing on the road against the best team in The NBA without their 2 best players, it would have taken a truly inspired performance to win in Miami.

Jeff Green had to come out in the 4th quarter after falling on his left arm after dunking, so the team will have to monitor his health as the season winds down. It was great to see "The Green Monster" bounce back from his poor play Wednesday night against Brooklyn, though I have noticed most of his best games have been without KG in the lineup.

Hopefully Doc Rivers comes up with a way to get Green going even when he's the third option behind Garnett and Pierce. Without Rondo and Sullinger, Green will likely be the X-factor in the postseason: if he plays like he has over the last 2 months, Boston could be a dark horse playoff contender.

Brandon Bass continued his excellent production of late as well, which he'll have to keep up in order to take pressure off the veterans. It wasn't a great night for Celtics fans, but the good news (depending on your views regarding playoff match-ups) is that after Milwaukee's loss tonight, we won't be playing this dominant Heat team anytime soon.