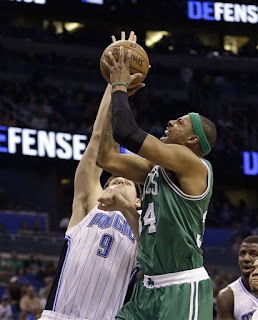 The Boston Celtics defeated the Orlando Magic 120 to 88 at the Amway Center tonight. This game was a snooze-fest as the Celtics had it on-lock pretty much from the tip-off. Pierce and KG returned to the lineup and played really well, but this win was an entire team win. The C’s had seven players with 12+ points, with Courtney Lee leading the pack with 20 points.

The Magic played without old friend Big Baby and Jameer Nelson, and they were really hurting. Orlando shot sub 40% pretty much the entire night, and the Celtics shot a smooth 59%. The leading scorer for the Magic was Tobias Harris, who dropped 22, and Nikola Vucevic had a good night notching a double-double. The Celitcs look to get back after it on Tuesday at the Garden versus the Pacers.