Pierce and Garnett likely to play tonight: Is a winning record important? 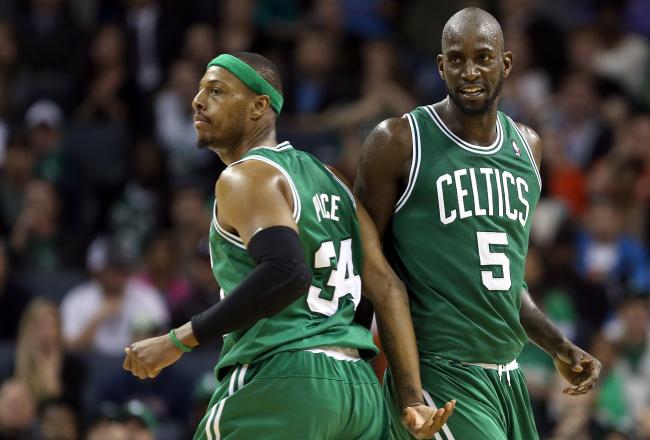 
Paul Pierce and Kevin Garnett will likely play tonight as the C's look to leave Florida with a win against the Magic: on.nba.com/111OmSy
— Boston Celtics (@celtics) April 13, 2013


After yesterday's loss Jason Terry called this evening's contest a must win.  The fact that Pierce and Garnett are both playing suggests the team is definitely interested in heading back home with a victory.  With 3 games remaining the Celtics magic number to clinch the East's #7 seed is 1; just a single win by Boston or a Bucks loss will get it done.  And since Milwaukee closes the season against Denver and OKC, it's extremely likely the C's don't actually need to win another game until the playoffs start.

Having said that, it's worth noting that Boston's record currently stands at 40-39.  Since an impressive victory over the Clippers on February 3rd (part of the 7 game streak immediately following Rajon Rondo's ACL tear) lifted the Celtics to 24-23, they've been above .500 ever since.  Whether or not this is something that actually matters remains to be seen.  But my guess is there is a certain degree of pride the players and coaches take in being a "winning" franchise.  It's also possible that any sort of mental edge they might hold over playoff opponents simply by being "the Celtics" could be somewhat diminished if they are thought of as "only a .500 team."

Assuming Boston plays well and knocks of the Magic tonight, I wouldn't mind at all if they put forth a similar effort (and don't rest anybody) against either the Pacers on Tuesday or the Raptors on Wednesday.  Call me crazy but there's something about a 42-40 record that gives me a much higher level of confidence that being 41-41 or 40-42.  It also might not hurt for the new "big" starting lineup of Garnett, Bass, Green, Pierce, and Bradley to get a little more time on the court together before the post season.