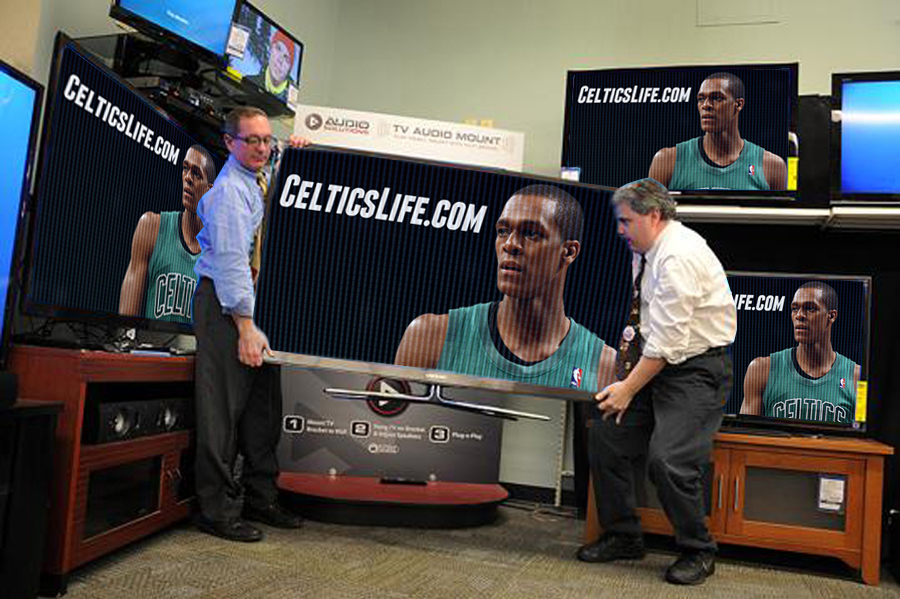 As Rajon Rondo has evolved as a player, there has long been an assumption that two Rondo's exist. 'National TV Rondo', the guy who puts up triple doubles and leads the Celtics to big wins over good teams as the whole country watches; and 'Local TV Rondo', the guy who seems to float through games against the Pistons and Bobcats of the world as the C's lose games they should win on paper. Rondo, they said, turned it on when all eyes were on him, and turned it off when only Mike & Tommy were calling the action (sorry Mike & Tommy!). Well finally the numbers are in - and the 'National TV' argument is dead. Kind of.

Ryan Fortin, of 'The Harvard College Sports Analysis Collective' published an article (link) yesterday about this exact topic, and he believes the numbers he found support the idea of 'National TV Rondo'. I disagree. Let's take a look at what Ryan found (big props to him for breaking down the National/Regional TV stats for Rondo).

All of his averages, including points, rebounds, steals, and field goal attempts are higher in nationally televised games. Though none of the p-values are below 0.05, and thus not “statistically significant,” the sample of games is small enough that we should still take notice — I think they can still be considered practically significant results. Interestingly, his assist total is lower, but the high p-value suggests that there’s not much to read into there.

It would appear Simmons is right — Rondo does play better when the most people are watching him. Whether it’s a positive thing that he can elevate his game in big contests or negative that he doesn’t play this way all the time is difficult to say, but it shows why Celtics fans often become frustrated with their talented point guard.


Ok, so on the surface it appears that Fortin's research checks out, and that Rondo does play better in Nationally televised games. After all his 16.2/10.2/6.8 splits in nationally televised games are clearly superior to his 13/11.6/5.3 splits in non-nationally televised games. That is a 24.6% spike in points, and a 28.3% spike in boards, which coupled with his 22% decrease in assists - shows a massive spike in aggressiveness from Rondo. However, I think that Fortin is missing what is actually causing this bump in aggression/production. It's not who is watching Rondo play, but the quality of competition Rondo is going against. In other words - the spike is caused by Rondo picking up his play against quality teams. The fact that some of these games against good teams are on national TV is just circumstance.

To prove this, I broke down Rondo's numbers over the past two seasons against playoff, and non-playoff opponents to see if we saw a similar spike in production. Considering many games against playoff teams are not broadcasted nationally (the Celtics play 19 nationally televised games this season, and 45 games against playoff competition), this should help draw a clearer picture of the true reason for Rondo's improved play. Here's what I found (I did not include playoff games as Rondo's minutes spike immensely during playoff time - thus skewing the data).

As you can see - that same production spike is visible. This time, Rondo saw a 32.4% spike in scoring, and a 19.1% increase in rebounds, while losing 5.1% of his assists. Now of course, those frustrated with Rondo for seemingly hitting the on/off switch depending on who the Celtics are playing are still going to be upset. And that's perfectly fine. What Fortin's study, and my numbers prove - is that Rondo does raise his level of play depending on the situation. However I would argue that this downside is still worth having Rondo on your team.

Taking a look at the numbers, Rondo's averages against good teams (14.3/11.1/5.6) are certainly elite. When you also consider Rondo's playoff averages last season (17.3/11.9/6.7), it is clear that Rondo is one of the best players in the league when he is on. While it is certainly frustrating watching Rondo when his switch is in 'off' mode, keep this in mind. There are very few players with the capability of playing at Rondo's level when he is fully engaged, and the players that can rise to that level - are those capable of being one of the top 2 players on an NBA champion. Now would it be a better situation if Rondo had that Bill Russell/Michael Jordan/Kobe Bryant, 'I'm going to kill you every single night' mentality? Absolutely. But considering the Celtics won't be trading #9 for a player of that caliber (the one rumored Rondo trade I would have been 100% for is the Rondo-CP3 swap before the 2011 season), they are better off keeping the guy who has the ability to raise his game to similar levels when it matters most.

Another reason he's worth holding on to, is that paying a guy who can reach his level of play just $12 million dollars a season is grand larceny in today's NBA. Guys with his pedigree and skill-set make $16-20 million, so paying Rondo 60-75% of that is a big win for Boston.

At the end of the day the ugly truth is that it is far easier to find 'grinders' like Courtney Lee and Avery Bradley who give their all every single night and help you win regular season games, than it is to find a guy like Rondo who can take over a playoff series. In an ideal world Rondo is watching his team have success without him, and has realized that he should bring his 'A-game' each and every night. But even if he doesn't - he's worth his contract because what he does in April, May, and June.

Awesome job with the graphic by @wilkeduhn