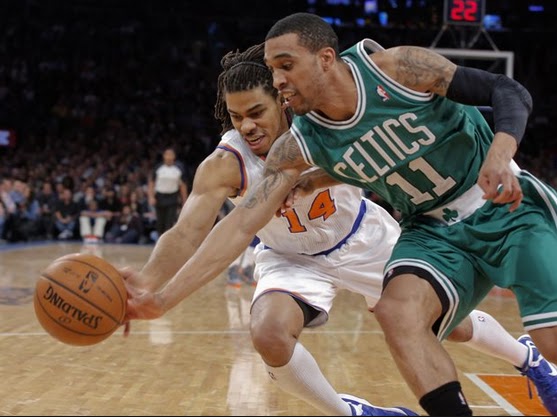 Kevin Garnett might be out for the next two weeks with ankle inflammation, and Courtney Lee is nursing an ankle sprain of his own that could keep him on the bench for tonight's showdown agains The New York Knicks. The Celtics shooting guard did not participate in this morning's shootaround at TD Garden, which could mean more playing time for newly acquired youngsters Jordan Crawford and Terrence Williams.

The Knicks are struggling with injuries as well, as All-Star center Tyson Chandler, who has missed 6 games with a bulging disk in his neck, is a game-time decision.

Boston could definitely use Courtney Lee to help push the tempo on offense and help Avery Bradley contain Raymond Felton and J.R. Smith. If he doesn't see the floor, keep an eye on Jason Terry's play. These are the type of games the Jet lives for. A hot-shooting night against our division rivals could key us to victory while another stinker could send the C's reeling to their fifth straight loss.

Tyson Chandler is an even bigger question mark: if he sits tonight, players like Brandon Bass and Jeff Green will shift from just trying to get their shot off in the paint to elevating confidently for dunks.

Regardless of who suits up, this should be another exciting matchup between the Knickerbockers and Celtics.