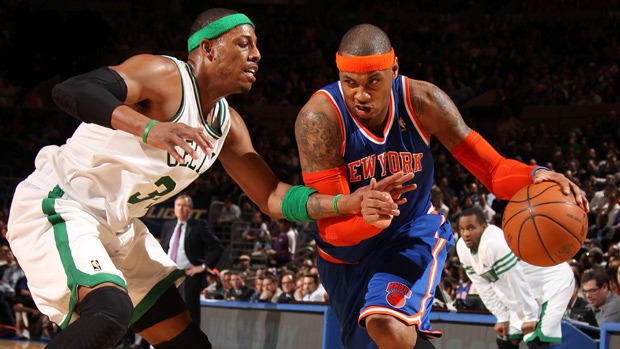 Well that was ugly.

The Celtics have now lost five straight, falling 100-85 to the Knicks.

You knew you were in for a gem of a game when it took three minutes for either team to score the first bucket. The rest of the game was not much prettier and it could be because there just wasn't enough talent on the court.

The list of players who weren't suiting up for this game was almost as long as those who were available. No Kevin Garnett or Courtney Lee, to go with Rajon Rondo and Jared Sullinger for Boston (36-34) and No Amare Stoudemire or Tyson Chandler for the Knicks (43-26).

In what looked like an homage to March Madness, neither team started a player over 6'9" and the Knicks even started three guards with Iman Shumpert, Raymond Felton and Pablo Prigioni.

The Celtics kept it close for most of the second half, but it was all downhill after that. The Knicks cruised to the win behind Carmelo Anthony's 29 points and eight rebounds and J.R. Smith's 32 points and seven rebounds.

Boston at 44.9 percent actually shot better from the field than New York at 43.3 percent, but the 19 turnovers the Celtics had took that advantage away pretty quick.

Garnett is still a week or two away from rejoining the team and Lee is listed as day-to-day, so this team needs to figure out how to win if the Celtics want to avoid the dreaded eigth seed in the playoffs and a first round matchup with the Juggernaut that is Miami.

The Celtics will get their chance to break the losing streak when they play at Cleveland Wednesday.