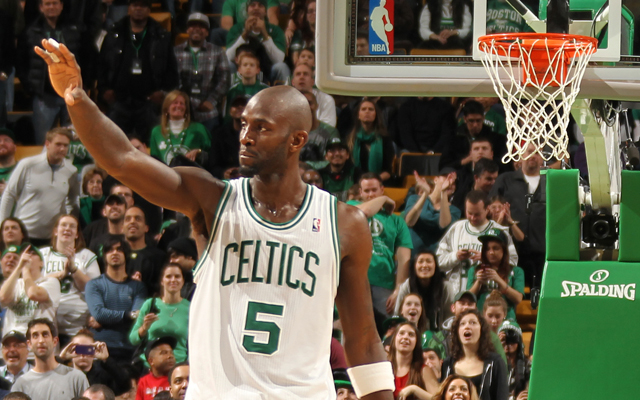 Sweet Jesus, it's 1 am on a Friday night, yet the rumors keep rolling in. But this time is a little different. This time it's Woj (esteemed Yahoo NBA insider Adrian Wojnarowski). The proposed deal: Kevin Garnett for Clippers PG Eric Bledsoe and C DeAndre Jordan.

The Boston Celtics and Los Angeles Clippers have been discussing a deal to trade forward Kevin Garnett for guard Eric Bledsoe and center DeAndre Jordan, league sources told Yahoo! Sports.
There are differing factions within the Celtics and Clippers on the prudence of the deal, but the two teams have been in regular contact about the possibility, sources said.
Nevertheless, the biggest hurdle could ultimately center on Garnett's willingness to waive his no-trade clause and accept a deal to the Clippers.
Because of his home in Malibu, and a close relationship with Clippers guard Chauncey Billups, there's hope that Garnett, a 15-time All-Star, could be coaxed into accepting a trade if an agreement is reached, sources said.

For the Celtics, Bledsoe, 23, and Jordan, 24 would give Boston two young players with significant upside to start a revamp of the roster. With Rajon Rondo returning next season from an ACL injury, it's unclear how the Celtics would proceed, but it could ultimately give them a chance to use a healthy Rondo in trade scenarios.

In my opinion it would take a perfect storm for Garnett to get traded, as you would need to get a great haul back, and be able to work a deal out with the Clippers (the only team KG would be willing to waive his no-trade clause for). This may be that perfect storm. Two young pieces that fill needs for the Celtics both now, and long into the future, and a chance to send Garnett to a championship caliber team in the city he spends his off-season.

With that said, Danny Ainge will need brass balls to deal off Garnett during an 8-1 stretch, but DA has been willing to piss fans off before.

For those unfamiliar - Wojnarowski is probably the best NBA writer on the planet. If he's writing this that means high level talks have gone down, and that this is more than just someone throwing something against the wall and seeing if it sticks. That doesn't mean it's a lock, but don't be so fast to say this is just another rumor.

EDIT: Figured I'd throw in a little more info on Bledsoe and Jordan for those unfamiliar.

Bledsoe - 6'1" Guard, 23 years old. Mostly plays the point but can also play the 2, fantastic defensive player, getting better on the offensive end. Paired with Bradley they would be one of the best defensive back courts in recent NBA history. Not a great shooter prior to this year, but he has made strides in 2012-13. Not a huge future in LA thanks to Chris Paul.

Contract - Signed through next season on his rookie deal ($2.6 million). Would need to be signed long term.

Jordan - 6'11" Center, 24 years old. Big, hulking center with tons of athleticism. For those that have missed Perk, Jordan would fill that void in your hearts as he's a true big man, a rarity in today's NBA. He can defend just about any center in the league, and might be the best dunking center in the NBA. Almost all of his offense comes from dunks though, as he has no semblance of a post game, and is the worst free throw shooter in the history of man kind. Really good shot blocker and very durable (2 missed games in the past 3 seasons).

Contract - Signed for 2 more years (until 2015), and $22.4 million dollars. The reason a KG for Bledsoe and Jordan deal works is because Jordan makes serious money. He's overpaid, but still young.

DOUBLE EDIT: Sam Amico of Fox Sports also wrote about the potential deal, and says that the C's would look to deal Paul Pierce if the Garnett deal goes through. From Amico's piece.

Rondo’s injury also opened the door for Celtics president of basketball operations Danny Ainge to consider moving some of his other major parts, including Garnett and forward Paul Pierce.

Sources speculated if Garnett were to agree to a trade, the Celtics would then aggressively attempt to move Pierce before Thursday’s trading deadline.

Hold on to your butts Celtics fans, 5 days until the deadline and not a single one of us has any idea what's in store.