Time to accept Jeff Green for what he is 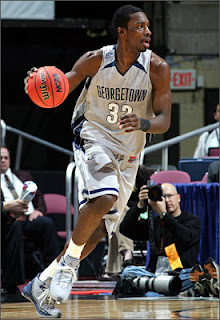 It appears the narrative about Jeff Green is changing from "When will he take over?" to "Here's why he isn't going to take over."

NBA analyst Ric Bucher put up a post recently saying Green "has everything that Paul Pierce has" except Green is a little weaker, which he makes up for in speed. Bucher wondered, like everyone else with eyes, why Green has never lived up to his talent.

Bucher said he talked to "one of my ol' NBA heads" who gave him a theory for Green:

coming up in the Princeton offense at Georgetown de-clawed him, in a way, because that offense doesn't ask any one player to dominate. It's a fit-in-and-get-along system. Green fit in and got along and he's been doing it ever since.

He then gave his own answer:

I'm also a believer that you are who you are, which would mean Green's natural disposition, not his collegiate system, has made him the player he is.

While it looks like Green is starting to contribute more, it's just not enough. He is the poster child of inconsistency.

Against Cleveland and Chicago recently, Green scored three points in each game. Against the Bucks and the Nets, he scored 14 points and 15 points respectively. The rebounding numbers are atrocious for a guy some say can play the four. His highest total was eight against the Sixers on Dec. 7.

As for the reasons for this lack of production? The college system theory makes sense, but players have come out of Georgetown and produced (Greg Monroe and Roy Hibbert) without any talk of the Princeton offense. A system should not hold a player back if they are willing to learn, which leans more towards Bucher's theory.

Green has never been a floor leader because that's not his personality. He's had four years of professional basketball to show what he's got.

If Kevin Garnett, Doc Rivers and a year away from basketball from a life-threatening heart condition cannot motivate Green, maybe it's time to accept Green for who is: an average role player who shows flashes of talent from time to time.

And let go of who you want him to be: a legit starter who could be a major piece on a championship team.

He's just not built that way.