3 things to do to beat the Cavs tonight

The sad fact is that the Celtics are a .500 team right now who have lost 3 in a row. The good news is that we're playing against Cavs tonight, a 5-21 team, at TD Garden, which at first glance looks like a perfect setting to shake things around. However, the Cavs can be a better team than their record shows: they have recently lost to Bucks by only 4 and Knicks by only 1. Here are some of the things that Celtics should take care of tonight to assure a much needed victory.

1. Taking care of the paint

The Cavaliers have one of the best centers in the league in Anderson Varejao who averages 14.1 points and 14.4 rebounds (of which 5.5 are offensive) this season. If that doesn't scare you enough, add 3.5 assists per game as well. Celtics have let Joakim Noah have his second triple-double of his career last night. By itself it sounds terrible, but listen to this: His first one was against a 13-20 Bucks team last year whose starting frontcourt was a 6-9 Ersan Ilyasova who is not known for his defense and a 6-10 Jon Leuer (heard of him?) who has only played 72 minutes so far with Cavs this year. Yep, this is how disgusting things were last night, oh, and add to that the 48 points in the paint we allowed compared to our 36.

As I have explained before, Celtics' seeming rebounding woes are not as much of woes as long as (1) they take care of it at the defensive end and (2) don't let momentum escape from their hands in close moments. Unfortunately, almost all of the games we have played recently were close games, so that might be an important factor tonight. Varejao is no Reggie Evans, which means the offensive rebounds he grabs will likely turn into second chance points. The Celtics need to fight inside and box out. It would help to see Pierce, Lee and Rondo crash the board as well. 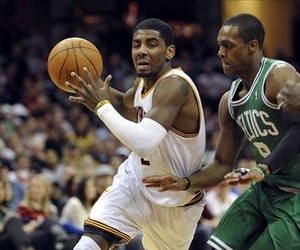 Kyrie Irving is an athletic point guard and a prolific scorer who doesn't hesitate to put up 20 points any given night. Per mysynergysports data, he scores very efficiently in cuts and transitions, yet he is not as good in isolations and P&Rs (~40%). This is good news and bad news, as Boston holds their opponents to ~30% scoring in such plays, yet you don't need statistical backup to see that we have been terrible so far at weak-side defense and cuts.

It's not just Irving, Cavs' other two guards Waiters and Miles get major minutes and can put up impressive numbers from time to time. These three players score more than half of Cavaliers points (49 of 94.2), so we'll need some effort tonight from Rondo and Lee especially. Historically, Rondo thrives when he sees a challenge, so hopefully playing against a highly touted player in Irving will rev his engine.

Ladies and gentlemen, I present to you the Cavaliers bench players who played against Toronto last night: CJ Miles, Tyler Zeller, Daniel Gibson, Luke Walton, Donald Sloan. Take away the decent sixth man in Miles, and you're left with a terrible squad. Walton and Sloan's minutes weren't significant either (a total of 5), so tonight either the weight is mostly going to be on the starters who already registered ~40 minutes last night or an at most sub-par bench is going to see some valuable time. Cannot be bad news.

One of the keys to the Raptors victory over Cavs last night was that their bench outscored Cavs' 59-21. Celtics have a prolific bench on paper, yet we have not seen much consistency so far from them. If Terry and Green get going (there is no reason for them not to against a team that ranks 27th defensively) and with some help from the Brazilian blur too, we might be able to watch a comfortable game, a rare sight for us this year.