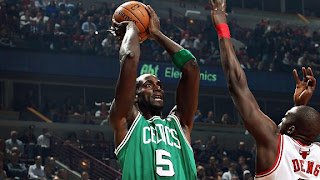 Celtics have finally played the most efficient, if not beautiful basketball (well, save for 4th quarter) of the season to get a very important win over Bulls in their second consecutive road game. The starters, with the recent promotion of Terry (13 pts, 5-10 FGs) and Bass (16 pts, 5 rbs, 3 assists [yep]), seem to have clicked as they all produced impressive +/- numbers and scored in double digits. Terry has also shown signs of embracing his role as he hit couple of very big shots down the stretch in plays formerly run for Ray Allen.

The bench has continued to struggle which has been a familiar story for Celtics fans for quite some time, however they still managed to outscore a limited Chicago bench 27-18. Green (7 pts) has grabbed 5 rebounds which made up a little for his scoring woes. Lee (4 pts, -17), on the other hand, has continued to underperform, which will make things easier for Doc when Bradley returns.

Best parts of the stat sheet are that Celtics only turned the ball over 8 times, had 9 steals and 5 blocked shots, all better numbers than those of a Chicago team that is known for its defense. Celtics were also 16-16 from the line.

In other news, Rondo's impressive 10+ assist streak came within 22.9 seconds of ending yet Bass was there to save it with a dunk. I'm sure he will thank him on the bus.
Photo credit: Gary Dineen/Getty Images