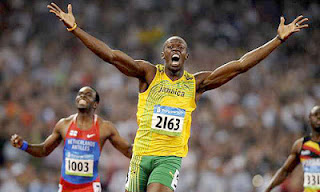 That Rajon Rondo is pretty confident!

This was a pretty funny topic brought up in both the WEEI interviews today with Doc Rivers and Rajon Rondo.

Doc brought up that one time Usain Bolt came into the Celtics locker room and he recalled Rondo and Bolt talking about who was the fastest.

When Rondo went on the radio later that day, they asked him about who would win in a race.

Rivers said that they decided they would have to have a race but they'd have to dribble.

"Oh yeah, I'll definitely get him with a dribble," Rondo said when he heard that being played back to him.

Rivers also said that the players argued on the bus one time whether or not Rondo could beat LeBron James in a race. Obviously Rondo thought he could, the rest of the team seemed to disagree.

The interview ended on this funny note.

M&M: Alright so answer the question then, you and LeBron, no dribbling, who's faster down the court end to end?

M&M: I'd ask you about Dwyane Wade but we'll leave that one alone.

M&M: I'd ask you about Ray but we'll leave that one alone.

Rondo also said Barbosa challenges him the best in practice with his quickness.

You can listen to the full interview here, this part starts at the 7:58 mark.