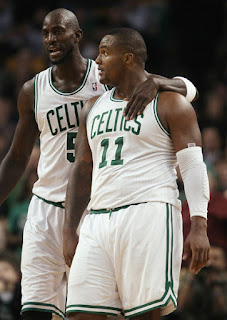 Since Dwight Howard departed from Orlando, former Celtic Glen "Big Baby" Davis has been able to play a bigger role for the Magic, which is something he has clearly wanted over the years. And for the first few games, Davis played amazingly well, scoring 29 points against Denver and 22 points against Phoenix. A few days ago, Davis was 5th in the league in scoring. But Davis started having some trouble the past few games, going 9-for-31 from the floor in losses to the Bulls and Timberwolves, so Big Baby turned to his former teammate Kevin Garnett for advice.

From the Orlando Sentinel:

“He was just telling me some good advice, some great advice that really can most definitely help me,” Davis said. “He was saying, ‘Hey, now you’ve graduated. You’re a Navy SEAL now.’ And I see it. I see it.”


Garnett has played the mentor role for many younger Celtics players over the years. We have seen KG dish out a lot of tough love, especially to Davis (for example, the crying on the bench incident), but Garnett also gives out great advice. The nurturing side of KG is one that only the Celtics players and fans usually see, as most opposing teams and their fans just see Garnett as crazy, intense, and think of him as dirty. But in reality, KG is constantly willing to help others, and I really hope that after he retires from the NBA, he will stay with the Celtics in some capacity where he can put his mentoring skills to good use.

Looking at this from another angle, what do you think of Garnett helping Big Baby in light of the Ray Allen cold shoulder incident? Technically, Davis is a member of an "enemy" team, as he plays for another Eastern Conference franchise. From a personal standpoint, I don't have any issue with KG giving advice to a former teammate, especially one that was traded away by the Celtics. But I have a feeling that if Ray Allen called KG for advice, Kevin Garnett would probably not answer and not return Ray's call, since he no longer has his phone number.