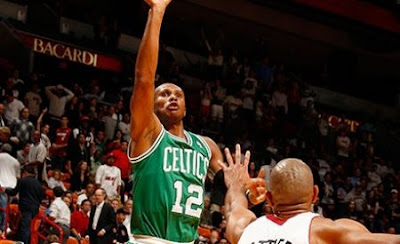 Danny Ainge talked to Leandro Barbosa back in July about signing with the Celtics, but Barbosa wanted more money than Ainge was offering. Ainge offered both Barbosa and old friend Mickael Pietrus the veteran's minimum but only Barbosa accepted. Ainge made sure to emphasize that signing Barbosa wasn't due to Bradley's injury or the lack of depth at point guard, but because he is a good player. Danny also apparently had wanted Barbosa for a while.


“We talked with Leandro on July 1. He’s a guy that we liked, and we followed, and evaluated for a long time. We thought he was a really good player who could help us. We weren’t desperate. We liked what we had. But Leandro was a very good player who was available.”

Barbosa scored 16 points in his debut with the Celtics, almost sparking a comeback against the Miami Heat. Captain Paul Pierce was appreciative of his efforts, saying his offensive abilities will be put to good use as a sparkplug off of the Celtics bench.

Its pretty interesting that Danny did look to bring back Pietrus despite his tumultuous season last year. I'm glad we got Barbosa, he can really fill it up in a hurry and is it too much to say hes the best fifth guard in the league?

Danny also briefly alluded to the possibility of sending both Fab Melo and Kris Joseph down to the Maine Red Claws of the D-League to get both of those players some more practice and game time. He also mentioned how old friends JaJuan Johnson (now in the D-League) and E’Twaun Moore (now with the Orlando Magic) did not go down to the D-League last year due to injuries, the shortened season, and their own play.