A look back on Kevin Garnett metaphors 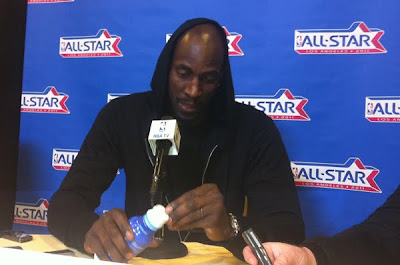 Last night after the loss to the Milwaukee Bucks, Kevin Garnett gave a speech to his teammates that involved a "pack of hyenas" metaphor. Strange to say the least. But this isn't the first time Kevin has said some very strange metaphors. Lets look back on some of his best.


"We had four assists at halftime, that’s not us. That’s like a green squirrel; Like, 'What’s going on?'

After a win against the New York Knicks on 03/22/11, Kevin Garnett compared only having four assists at halftime to a green squirrel. He meant that both of those things are very odd, but the idea of a green squirrel is so out there. Only KG

“Shaq is like paradise, man" Garnett said. "You ever wash your sheets and then go outside and hang them out, and the sun dries them? You ever smell the sheets?"

“That’s what Shaq is, Shaq is like,” Garnett said before breathing in deeply, like he was inhaling fresh air. “I don’t want to give any products any tags right now, but you know what I’m saying. For anybody who’s ever hung out clothes, they know what I mean.”

I'm sure Shaq appreciated Kevin basically calling him a breath of fresh air, but the way Garnett went in describing Shaq was just too funny. The actual way he took a deep breath while describing him was the best. Only KG.

KG ranting while Craig Sager trying to talk is the stuff of high comedy. Kevin compared a huge comeback win over the Magic to being in a bar fight. Even dropped a Barkley reference. Only KG