The Celtics are old... and there's nothing wrong with that 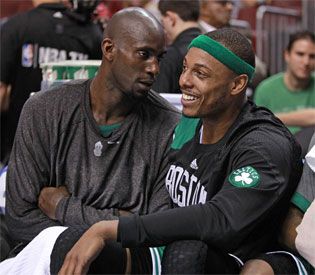 So I was reading Red's Army earlier today and they had a good idea for a column where they act as myth busters. I was happy to see the first one, "The Celtics are not 'old',” as I figured the author would then disprove this and explain that we are in fact still old. I've seen this said in the Shout Box throughout the Summer how we are not old anymore and I think it's BS.

The Celtics are old... and there's nothing wrong with that. We were old last season. We were old the season before that, and the season before that. We're not suddenly young because we added a couple of good young players. You win in this league with stars and out of our stars, the majority are old. KG is 36. Terry is 35. Pierce turns 35 on Saturday (Happy Birthday Captain!). Now Rondo is our best player and despite media members and bloggers suddenly declaring this now, he has been ever since the 2009 playoffs against Chicago. That's a myth that needs to be busted, but I digress.

If the Celtics win the title this season it will be a remarkable story partly in fact because it is pretty much unheard of to win a title with 3 of your top 4 guys being in their mid 30's. Most players have retired by that age. Most stars are no longer stars. Most guys that age can't shake the injury bug. It's just plain life that as you get older it takes longer to recover from injuries. Pierce, KG, and Terry are old. When Bird was 36, he was retired. When McHale was 36, he was retired. When Dennis Johnson was 36, he was retired. An "old" Bill Russell got major props for winning a title in his final season despite his advanced basketball age of 34. Honestly, someone please name me one NBA title winner who had three of their four best players over the age of 35? 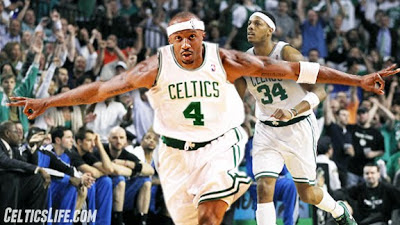 Yes we've added some nice young/ in their prime pieces in Sully, Green and Lee to go along with Rondo, Bass, and Bradley. Are team has more balance now as we're relying less on old corpses like 'Sheed, JO, and Shaq. There's two kinds of old. Those who defy the norm for being old like Jet, Pierce, and KG and then shells of their former selves like the O'Neals and Wallace. What makes us still title contenders is because our old guys can still ball. KG was one of the top performers in the league last playoffs and Pierce still has game (unfortunately being old might have accounted for him being unable to shake his injury last postseason). Terry still has game. In fact I'm not worried at all about age effects in terms of basketball skills with this threesome. My only worry is health.

Injuries happen to all players (see Perk in 2010 and Rondo in 2011), but anyone involved in basketball will tell you it's a bigger concern for older players (We might have won a title in 2009 if KG doesn't get hurt. Same last year if we have Pierce at 100%). Doc has said this for several years now, health is the key. When younger guys get injured it's bad luck. When older guys get injured it shouldn't be a surprise.

So if we are lucky enough to have a healthy squad this spring, with Pierce, KG and Terry all close to 100% we have a legit shot at a title. But we won't win it because these guys suddenly aren't old anymore. It will be because our old guys held up throughout the grind and kicked some younger players' asses. So what that the average age of the team might have gone down? The guys that count are the guys that are in there at the end of the 4th quarter in tight games. Anyone can waive towels at the end of the bench. It can be young guys like Melo, Joseph, and Christmas, or older guys like Marquis, Dooling, and Collins. A team's average age means very little.

Also, so what if people call the Celtics old? I like being the underdogs. People care way too much what the "experts" say on ESPN. Fuck them. As fans why do we care so much if outsiders say we're "young" or the "favorite." I prefer when they pick against us. Celtics fans, no need to call the Lakers old now. We're old too. It's like rocks in glass houses. Don't stoop to their level. The Lakers are a better team this season than last with an "old" Nash over a corpse like Derek Fisher and a younger Sessions. The Lakers are better with a young player like Dwight Howard over a young player with senior citizen knees in Andrew Bynum. The Lakers are better with an old Antawn "I can't spell my name right" Jamison then whatever trash they had off the bench last season. The Heat are better this year too adding old Ray Allen and old Rashard Lewis. But we're better as well and if we stay healthy we can win #18 in June. You can't ask for much more than that. And if we win it, it will be because Rondo and the old guys did their thing. We're old, but we're still going to whoop your young asses. Deal with it.