Chris Wilcox "a ways away" from returning 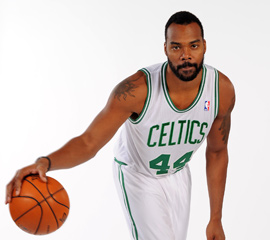 
Rivers said he is "a ways away" from returning.

Wilcox said his focus now is on strengthening his core, which was significantly weakened after his season-ending surgery in March.

"None of this (heart) is even a question now," Wilcox said. "Just my lower back, is telling me I need to slow down a little bit; I'm rushing it, moving a little too fast. It's tough. When you're competitive and you see these guys go hard every day, you want a piece of it. I just have to take my time and get right."

Chris Wilcox can't stay healthy. It's the reason I was so pessimistic about him last year and that continued this year.

The last time Chris Wilcox played in all 82 games was five years ago. Last year he only played in 28, in a shortened season, and even that wasn't his lowest.

He looked great catching alley oops from Rondo at times, but those days were short lived. I think we'll be seeing a lot of Darko and even Collins this year.