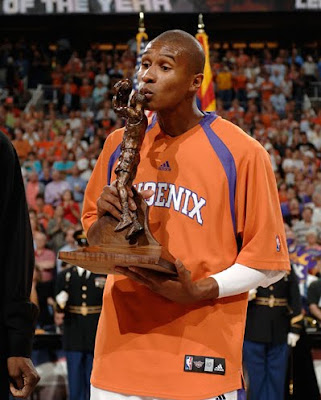 Leandro Barbosa is a Boston Celtic. And as a Phoenix native who watched hundreds of games back in the glory days, I can tell you that this guy can play. The Steve Nash, Shawn Marion, Amare Stoudemire trio led one of the all-time most exciting teams to watch. They were basically the anti-Celtics: they played atrocious defense (other than Marion) and broke 100 points nearly every single game, with some particularly memorable scoring frenzies. Barbosa was probably the 4th most important player on the team from '05-'08. However, he has faded from the headlines since leaving The Valley of the Sun, so the question is, what can we expect?

Upside:
Barbosa can flat out score. The guy was instant offense off the bench, winning 6th Man of the Year on 18 ppg, 43% 3's, 85% FT's. In his prime, he was one of the NBA's fastest players, and he can still gun it on a fast break. With Nash on the floor, LB would play 2 guard, scoring tons of fast break layups and shooting accurately from 3 with his unusual 2-handed release. That's his entire game; he rarely shoots mid-range. He would then play point with Nash on the bench. Barbosa could do the job but he isn't a true point-guard: he is a decent passer but he always looks to drive left and score regardless of which guard slot he's in. Barbosa really thrived under the D'Antoni system with Nash, but he still has game, putting up a +14 PER the last 2 seasons in Toronto and Indiana. He is gonna be really dangerous running with Rondo, and will bring tons of firepower to the 2nd unit sharing time with Jason Terry and eventually Courtney Lee (assuming Avery Bradley gets healthy.) From a chemistry perspective, he's very down-to-earth and never caused problems in Phoenix (He did make some hilarious Youtube videos with Nash). Also, as a fellow Brazilian, he should be able to help Fab Melo get comfortable.

Downside:
Barbosa is a porous defender. He is actually a great athlete who gets steals and blocks with good hops, great speed, and long arms. However, he falls asleep a lot and has awful awareness. D'Antoni never made him learn D, and that's a big reason why LB isn't a starter. While he will never be a lockdown defender, I do think that Barbosa can be decent in this system because of his athleticism and, more importantly, the Celtic effect. Enough barking from Doc, Rondo, and KG will get LB's head out of the clouds. With limited minutes available, his decision to take the veteran's minimum after making $7.6 million last season tells me he is willing to sacrifice to win (this year's biggest theme, Return of Ubuntu).

The Verdict:
This is a great move by Danny Ainge! Barbosa is still blazing quick and a dangerous shooter. He's only 29 and is a steal at the minimun. He should be making $3-5 million. He may not a true point guard, but he's still adequate at the 1, much better than Keyon Dooling (bless his heart) was and he's ready to contribute now, unlike Dionte Christmas (sorry to break it to you). I would much rather have LB as opposed to a washed up injury risk such as Allen Iverson or Derek Fisher. He should relieve Rondo of  pressure and minutes, giving us instant scoring off the bench on the break and from downtown. Most importantly, the Celtics have amazing injury protection and the backcourt weapons to excel even before Bradley gets back. The Brazilian Blur is an exciting, high-octane player who can thrive as a role-player for this team.