ESPN the Mag ranks C's 4th in the East 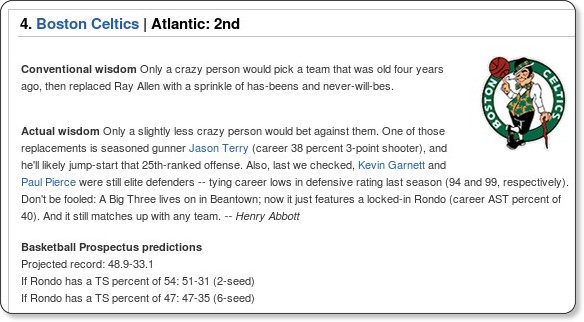 Maybe I'm a green footie-pajama wearing Celtics fan but the Hawks and Knicks are overrated and the C's and Bulls are underrated. My sleeper in the east is gonna be the Nets, I wouldn't be surprised if they finish better than the Knicks. It also seems like their giving the C's no respect... Good, more fuel for the fire of KG.

Nuggets and Timberwolves HAVE to be overrated, I like the Nuggets as a sleeper in the West but better than Lakers or Thunder?? Check out the rankings for the rest of the NBA.