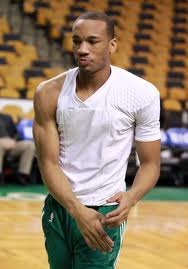 
Boston Celtics guard Avery Bradley, who underwent separate offseason surgeries on his shoulders, is "nowhere near ready" to participate in the team's training camp, which opens on Friday, coach Doc Rivers said.

"Not even close,'' Rivers told ESPNBoston.com. "I don't like to put a time limit on injuries, but I don't think you'll see him before December -- and there's a chance it could be closer to January.''

I stick by my earlier statements that I want Bradley to take as long as he needs to come back fully healthy. I don't want this shoulder stuff to be a nagging career thing. That said, it's sounding like we most likely won't see Bradley in a game until maybe the New Year and that's a shame.

I doubt Danny is comfortable with Terry as the only back-up to Rondo until Bradley returns. I mean let's say Rondo misses a game due to injury or suspension, Terry can't play 48 minutes at the point. Unfortunately if the Celtics sign a veteran point guard (please no Bibby or Fisher) then either Kris Joseph or Dionte Christmas will be getting cut. Unless Darko and Melo show enough in the preseason that the Celtics are willing to eat Jason Collins' guaranteed contract and waive him.