More Details Come Out Regarding Ray Allen's Unhappiness In Boston 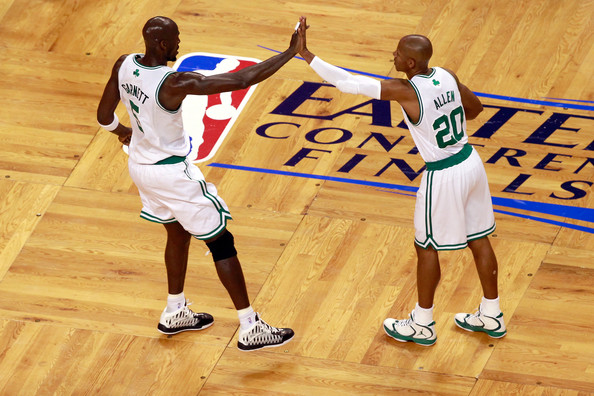 As expected, there was more to the story on Ray Allen's decision to take considerably less money to join forces with the enemy instead of resigning in Boston, where he has a lot of family and off court ties.  Leave it to arguably the best Boston sports writer in history, Jackie MacMullan (ESPN) to get the scope from Doc Rivers.

"It's just not right to put it all on Rondo," Rivers said. "Ray didn't leave because of Rondo. He left because of Ray. He wanted the ball more. He wanted a bunch of different things. He didn't feel loved. That doesn't make Ray a bad guy. "I needed to take some responsibility for [his unhappiness]. I made some of the decisions on how we should use Ray, and I would say Ray played pretty well in the role we drew up for him."

This piece of information was clear to us already.  We knew Ray wasn't happy with his role with the Boston Celtics.  Since the rise of Rondo, Ray has been looked at as the team's fourth option.  To which, we all can agree that Ray was the fourth best player on the team last year.  Heck, he might have been the fifth best with the way Avery Bradley played, giving Boston more.  At least the stats and the win totals showed us this.

The most interesting part of Jackie's story has that she got Doc to talk a little further on the topic. It wasn't direct in her story but if you read between the lines it was loud and clear.


The ever accountable veteran chafed at fellow superstar Kevin Garnett's unwillingness to take on some of the extra media and promotional requests that inevitably landed in Allen's lap. When it came time to talk contract extension, Allen felt slighted that he was not a priority. His deteriorating relationship with Rondo, meanwhile, was one of the worst-kept secrets on the team.

We knew about the contract negotiations issue, where Ray felt slighted that Kevin was first priority.  No one outside of Ray Allen would agree with his sentiment over this point, Kevin is by far the most important piece to this Celtics team.  Apparently, Ray Allen forgot what life was like in 2009 for the Celtics.

At this point, I am tired of the Ray Allen drama.  It appears he was more of a whiner then we have seen.  I don't know if we give him credit for keeping it private or if the Celtics took a page from Foxboro about keeping everything internally but from we can gather, Ray was a little delusional on the type of player he thinks he is.

Anyways, we will all enjoy booing him as he complaining about not getting enough money (so he took less?), wanting to start on an NBA team (still coming off the bench for Miami) and wanting to do less community and media work (the only thing he got from signing with Miami.)  Hopefully, this will be the end of the Ray Allen drama in Boston.